Martin Nakell’s introduction to my reading at Chapman University, April 25, 2022. With thanks to Mark Axelrod and the John Fowles Center for hosting.

To quote Charles Bernstein: “It’s true that, on the one hand, I mock and destabilize the foundation of a commitment to lyric poetry as an address toward truth or toward sincerity. But, on the other hand, if you’re interested in theory as a stable mode of knowledge production or critique moving toward truth, again, I should be banned from your republic.” Mr. Bernstein has directed the work of his poetry and his poetics, to displace the sincerity and sentimentality of contemporary lyric poetry in favor of a capacious poetics of language. When I begin a semester in a poetry workshop, I will always say that the first answer to the question, “what is this poem about?” will always be the same: it’s about language.
In an essay from The Attack of the Difficult Poems, Mr. Bernstein asks, with a smile on his page, “who invented language?” Therein is a call to attention. It’s a question, posed in language, ending with a question mark, perhaps a formally logical, but certainly a nonsensical, question. No one invented language. Even if we want to say it is possible — in the common sense of the word “invent” — to invent language — no one certainly did that á la — for example Alexander Graham Bell with his telephone in 1876. It’s a great question to ask, as it invites us to a feast of language, which ends in silence — and often enough, in Mr. Bernstein’s poetry, in laughter.
Mr. Bernstein studied philosophy as an undergraduate, writing his thesis under Stanley Cavell. His poetry has pursued that early attraction to the school of Ordinary Language Philosophy, in the lineage of Russell, Wittgenstein, et alia, which proposes, among other things, that the eternal and eternally unresolved questions of philosophy, “Does God Exist?” “How do we know what we know?” “What is meaning?” are not real questions; they are simply a matter of language. Language cannot convey universal, stable truth. If there is no language of truth, there is no self, if there is no constricted, stable, monolithic self, sincerity is but a social construction. Language is play.
Professor Axelrod’s journal, Mantissa, published, in the Spring 2016 issue, the Charles Bernstein poem “Recap” [collected in Near/Miss] which reads, in part,

And on and on and on. Regarding Marcel Duchamp’s “Fountain,” a urinal Duchamp submitted for the 1917 Society of Independent Artist’s exhibition, Duchamp comments: “everyday objects [are] raised to the dignity of a work of art by the artist’s act of choice.” Charles Bernstein’s everyday, ordinary language is transformed by his choice of words, phrases, rhythms, syntax, and presented on the page qua poetry. As with Duchamp, not only does this “raise” the language to the dignity of art, it leaves the page. In everyday life, when we say “How you doing,” we are speaking poetry, using language, always hearing poetry.  We walk, as it were, into a men’s room, and we see this beautifully sculpted “fountain.”  We hear poetry all around us all the time. And inside our own heads.
But Mr. Bernstein does not confine himself to one voice, one project. He plays in the fields of language, writing for example, in “Artifice of Absorption,” about “the heart of things”; or combining high art with low culture, mockery, and lyrical flight together in the closing stanza of “Virtual Reality”: “Popeye / no longer sails, but Betty / Boop will always sing sweetlier / sweetliest/ than the crow who fly / against the blank / remorse of castles made / by dusk /  dissolved in/ day’s baked light.” Or, earlier, in “Azuut D’Pund” from his 1979 book, Poetic Justice, “iz wurry aZoOt de puund reducey ap crrRisLe ehk nugkonj”
But then, as he says, he “should be banned from your Republic.” 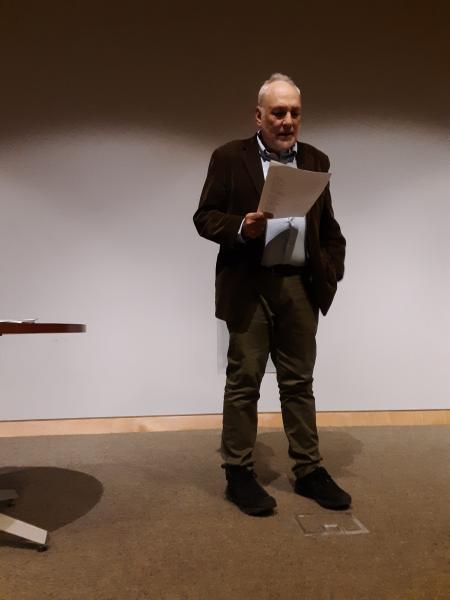 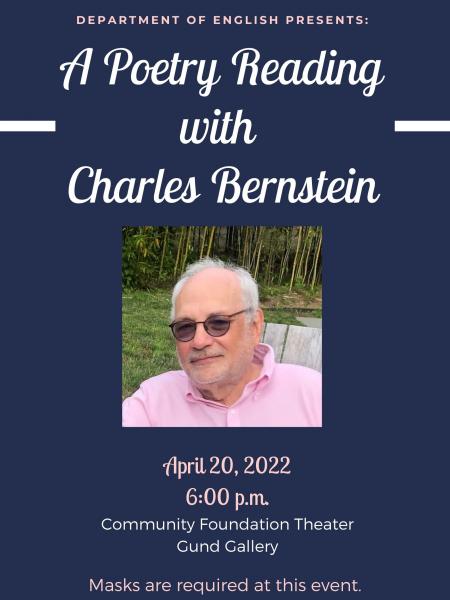