I wrote this short essay on the collaboration between Régis Bonvicino and Susan Bee, for an earlier catalog of the Generation Collective books. You can see a slide show of the book at Sibila.  Images from my collaboration with Jill Moser are here, with additional images from The Introvert in the new catalog.

Poet Régis Bonvicino runs the super-model through the poetic ringer in one of a set of poems to which he has challenged several exuberant artists to respond.

Bonvicino plays the role of provocateur with his poems, just that he wants the poems to provoke response, as in Whitman’s “Respondez!”: “Let murderers, bigots, fools, unclean persons, offer new propositions!”

The structural brilliance of Gervais Jassaud’s book series is the premise that each poem will provoke multiple, incommensurable images. This is a core value in Blake’s foundational illuminated books, where each book explored new conjunctions and disparities, including, as in The Four Zoas, different page orders. For Blake this was nothing less than the measure of Imagination against the tyranny of uniformity (“unit deformity” in poet Robert Grenier’s formulation).

The poem is a constant transformation of itself.

And at the middle of each book is a big rectangular hole: Jassaud’s emptiness gives way to the book’s storied becomings.

As if all we are and do revolves around a hollow center.

The hollow center is the Americas.

Tatjana Doll casts the series of poems as playing cards, as in the poem plays you or you play the  poem. Aces are witches, clubs beat the rhythm, spades are queens, and kings rule!

José Iraloa raises the bet of the book by moving into a three-dimensional space that surrounds or corrals it. His splashing red and black stains move toward an abstract counterpoint to the hyper-referentiality of the poems. Then he confronts the dark inner spaces, the nightmare reality that erupts in the daylight like burnt offerings at a pizza parlor. You say skeleton, I say: can you say that again?

That’s no phallus, that’s the election of my impotence, writ large.

Me transformo, you pale face.

Me tranformo, you the unexpected product of a sudden revelation.

I love art so much … but it never returns the favor.

Poems are stuck in black and white, which means that every color connected to a poem is proof of the inner life of words.

Susan Bee locates that inner life as if it was always there; but she invents it, as surely as God invents the Idea of God. Angels brush against spattered brushwork, gory purple eyes loom out amidst hearts pierced by arrows. Bonvicino’s diacritical pornographia undergoes an aesthetic transvaluation.

Each poem is a model of a possible world, that only comes into being when reading is active, activated. Each of these books offers such activated readings, making each poem a virtual or nodal point of possibility. 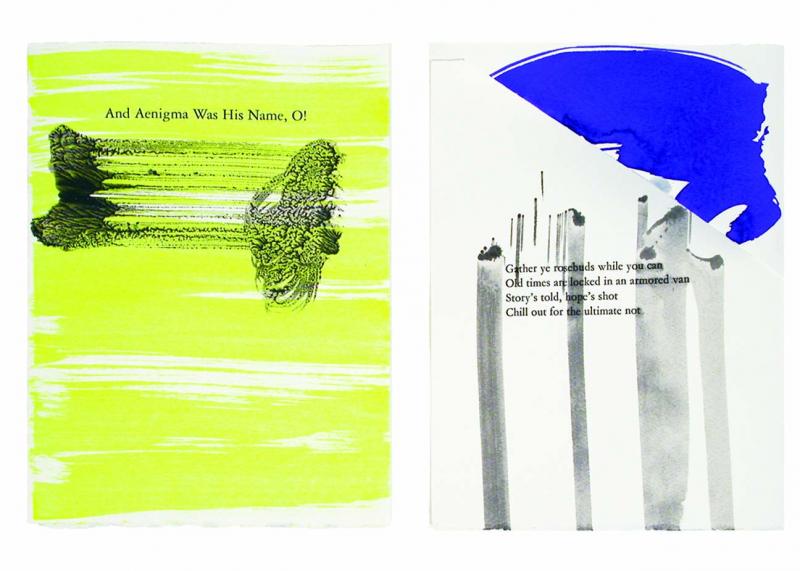