The Bookseller: “Not set out to be a book about the pandemic, this rowdy collection of poems, performances and translations nevertheless speaks volumes about the upside-down world we have all found ourselves living in.”

Though Bernstein’s poems play with form, they incorporate a melancholy, even tragic, sensibility. This “cognitive dissidence,” as Bernstein calls it, is reflected in a lyrically explosive mix of pathos, comedy, and wit, though the reader is kept guessing which is which at almost every turn. Topsy-Turvy includes an ode to the New York City subway and a memorial for Harpers Ferry hero Shields Green, along with collaborations with artists Amy Sillman and Richard Tuttle. This collection is also full of other voices: Pessoa, Geeshie Wiley, Friedrich Rückert, and Rimbaud; Carlos Drummond, Virgil, and Brian Ferneyhough; and even Caudio Amberian, an imaginary first-century aphorist.

These poems, performances, and translations are oddly prescient, marking a path through dark times with a politically engaged form of aesthetic resistance: We must “Continue / on, as / before, as / after.” 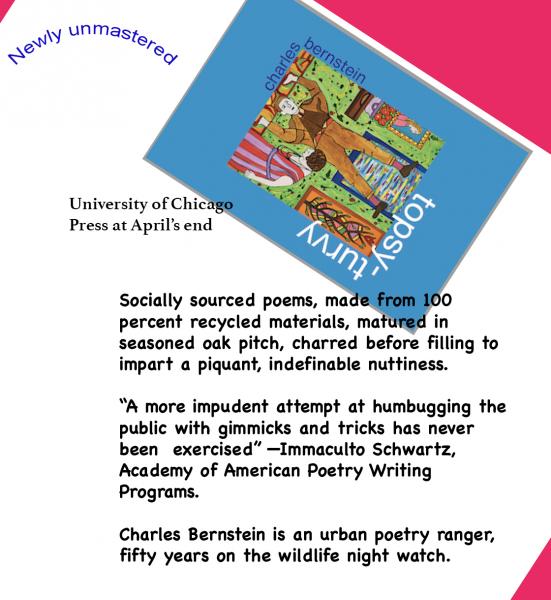