Calling a Koons a Koons

Allegorical micturition has swept
the guest halls of the art galleries
and the undermasses
wail in the background to iambic
beat. Sludge is proclaimed sludge,
hairdos hors d’oeuvres, as the soiled
face of inverted cardioerasty—a.k.a.
genital fetish—rears its mushy brow.
––from “Ambliopia” in The Sophist (1987)

The Jeff Koons retrospective at the Whitney Museum of American Art is to big art shows what The Little Mermaid is to big Broadway musicals: bright, breezy, and tuneless. Koons's art is a product of the Disnification of Warhol (and decidedly not the other way around). The show is worthwhile seeing as a monument to the most commercially successful aspects of the New York art market. As with the proverbial  restaurant, with food shot up with MSG, you leave the show aesthetically hungry. 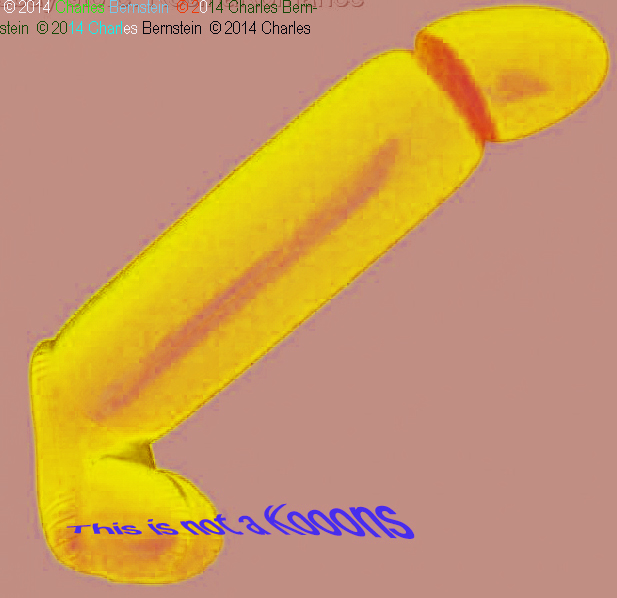 Bronzing your child’s baby shoes is here is monumentalized and monetized into the narcissism of bronzing your own phallus or shit (that is to say, your own infantile and adolescent fetishes). For those of us who love to love kitsch, Koons’s art is a slap in the face. Like the invisible worm in Blake’s “The Sick Rose,” he’s found our bed of crimson joy and his dark secret love has our fetish destroyed.

[image on left is a poetics lab simulation]

However, the most revealing works in the show come at the beginning: a set of mounted advertisements that resist aesthetic reframing. These works don’t do anything, think anything, or symbolize anything. They don't rearticulate, they sell. These works are not about transvaluation of the aesthetic kind but, in contrast, transvaluation of the monetary kind: printing your own paper currency and cashing it in at the bank. For this reason, more important than visual image is the collector’s imprint: JPMorgan Chase. Which is not to say the appropriated ads are without visual content: I was chilled by racial voyeurism of the works, which featured financially successful black athletes. 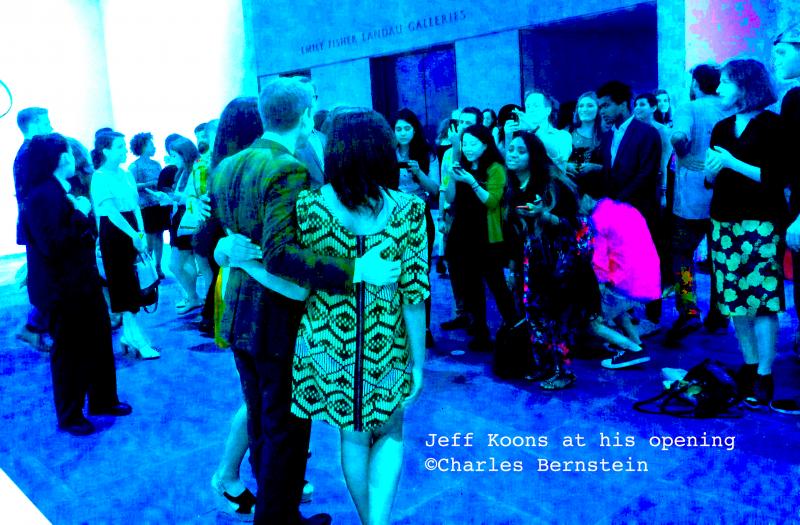 The Koons show turns on a simple but potent idea: the alchemy of turning base material into gold. (Who can resist the illuminated vacuum cleaners and floating basketballs?) Artnet reports that the total value of the work shown – Koons is the most commercially successful living American artist – is about one-half billion U.S. dollars. Viewers get to see the highest end art commodities in a show that is not only co-sponsored by Christie’s but is installed to look like an auction showroom. At the same time, the show fails to fully acknowledge that the titillation of Koons’s sale prices is far greater than the tease of the pornographic display (the real here is not sex but money). The show would have framed the work in a far more radical way if it included price tags next to each work. After all, nothing commands as much respect in America as money and there is an undeniable pleasure in seeing nearly worthless everyday objects and toys of our lives transvalued in this way.

Alchemists turned base metal to gold while Koons turns base objects – inflatable plastic toys being his main obsession – into metal. This reverse alchemy (plastic or plasticine to metal) is marvelous and mischievous. What gives the show its uncanny panache is the trompe l’oeil of the thin metal surface of Koon’s sculptures. Even knowing the objects are metal, it is impossible to believe without touching. The desire to touch is so great that the museum had to close a room the night I was there. You can only touch if you buy: for the rest of us it’s a peep show. The technical ingenuity here, and the giddiness of response, brings to mind something akin to experience of going to a DuPont pavilion at the world’s fair. Koons’s choice of images is secondary to the technical feat. 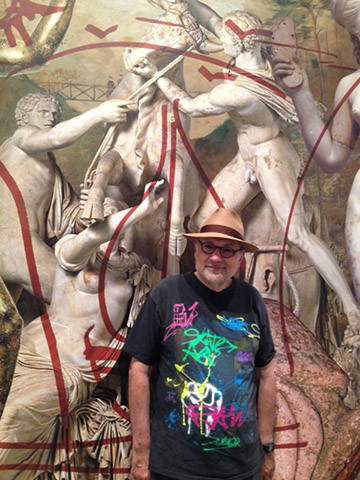 The most delightful room of the show is the one that features Koonsifications of baroque Roman sculpture. (Mónica de la Torre took  this picture of  me –– on the right --  in front of one of the works in this room.) Seeing Bernini’s rendering of drapery into marble is a marvel not entirely unlike Koon’s rendering of plasticoids into metaloids.

We hit pay dirt with the grand finale, Koons’s mountain of play dough. The New York Times review calls this work an "almost certain masterpiece” – a remarkable description for what is, at base, a bronzed pile of excrement.

It is too bad for Koons and the Whitney that this shows opens in the shadow of Kara Walker’s "A Subtlety" at Domino Sugar Factory, because Walker shows how public, grandly entertaining art can be self-reflective, politically acute, and aesthetically rich. In contrast, Koon’s just wants to play in art’s kiddie pool, call it Peter Pandering.  Of course, that’s what gives this show its uneasy allure.