A few days ago, Peter Stallybrass  pointed me toward the digital edition of Francis Daniel Pastorius (1651-1719) work,  His Hive, Melliotrophium Alvear or, Rusca Apium, Begun Anno Do[mi]ni or, in the year of Christian Account 1696. This work is a compendium of various kinds of "found" lore, a sort of precursor to Walter Benjamin's Arcades project --

Pastorius' commonplace book, usually referred to as the Beehive manuscript (from Pastorius' prologue, p. 1), is a compendium and alphabetical digest of knowledge including inscriptions, epitaphs, proverbs, poetry, Biblical citations, theological citations, quotations, a list of books he read or knew, copies of letters, and notes on science, useful herbs and other plants.

The Beehive is a foundational work of  American poetics, even if few American poets know it. Key, as Peter pointed out to me, is the alphabetical index,  the third volume, which enables a reader to find items scattered through the work, which consists of three volume of about 1000 pages. Certainly the index makes for a stellar, uncanny, found poem, more resonant for contemporary readers than Pastorius's own poetry. 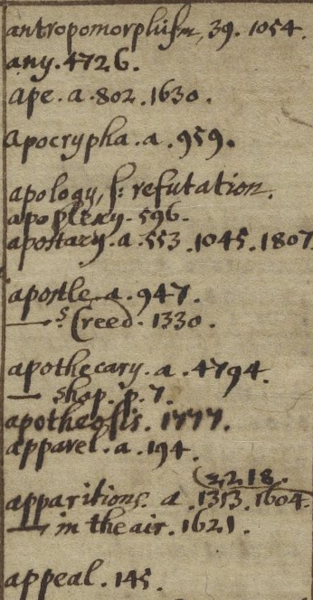 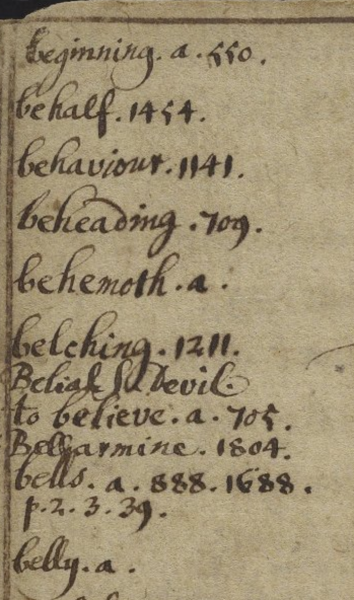 I love the list of sayings, in alphabetical order, that begins here. (If you view the image below in new tab you can read it.)

Given my current term of art (in Pitch of Poetry), "Midrashic Antinomianism" (antinomian means against the law (outlaw), I looked up "Antinomians" (with Peter's help) and found it in the index here. 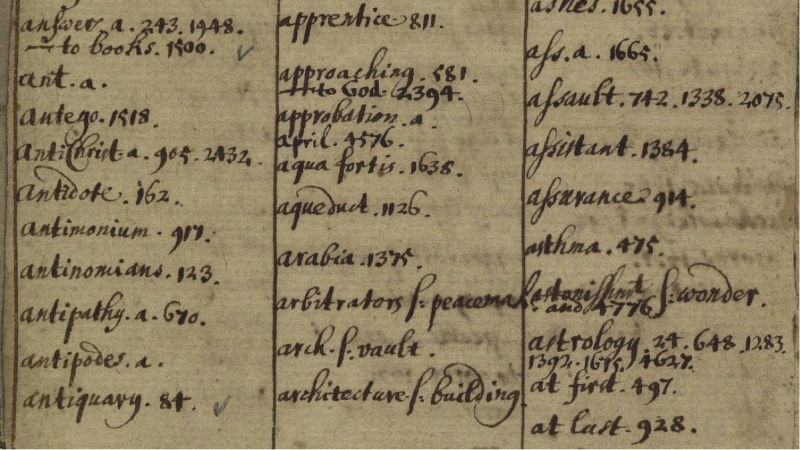 “Num. 123. Antinomians. What pity ‘tis to see so many Antinomians among us; Christs Law is Love one an other! Love your enemies! You that Love not, are Antinomians; but you that are for love are no Antinomians./ for the Law is fulfilled in this one word, viz. Love. the Antinomians affirm, that men are Justified before they believe, Barcl. p. 769.[1] Their Imputative Justification refuted, Id. p. 812.” (transciption: P. Stallybrass)

Here is Peter Stallybras's note to me on the work and on the entry on "Antimoniams":

Here’s the start (title page) of Pastorius's external index to his massive "Beehive." It follows on alphabetically, with "a" referring to the alphabetical part that is contained in volume 1 and the numbers referring to the part that starts at the end of volume 1 and continues in volume 2. The rather disorganized part of the book that gives at least some of the books that he consulted (first organized into "Quaker" and "No Quaker" but then not) begins here and continues for several pages.

Quakers were accused of Antinomianism, so there’s considerable irony in Pastorius’s claim that those who attack others are the real Antinomians! Not only had the Massachusetts Bay Colony accused Anne Hutchinson of Antinomianism; they had hanged the Quaker Mary Dyer in 1660. So much for their Christian “love.”

I should perhaps add that Pastorius was the founder of Germantown and also that he drafted the 1688 Germantown Quaker Petition Against Slavery -- the first such anti-slavery tract. In 2009, there was a conference on Pastorius.