Régis Bonvicino is to twenty-first century São Paulo what Charles Baudelaire was to nineteenth-century Paris: the poet as flaneur wandering through the cultural detritus of our time with mordant gaze and dark wit. Bonvicino’s ebullient poems are replete with philosophically searing perceptions and socially conscious lament. Not yet elegy, Bonvicino’s unrelenting acknowledgments center on the parasitic relation between those mangled by society and those doin’ the manglin.’

Odile Cisneros and Thérèse Bachand and Maria do Carmo Zanini do a fine job adapting the Brazilian poems to the American idiom. I contribute a few translations (and a collaboration). I included two of my translations of Bonvicino in Recalculating. This is one of them, a favorite:

Green Integer writes: “Régis Bonvicino’s poems are centered around the dystopia of urban spaces — especially São Paulo where he lives. While his poems include the imagery of nature, they are nevertheless resolutely unromantic, and often brutal in their street-level observations. Friction reigns between the intense lyricism and gritty content, between sound and syntax, between rhyme and intense rhythmic shifts.” 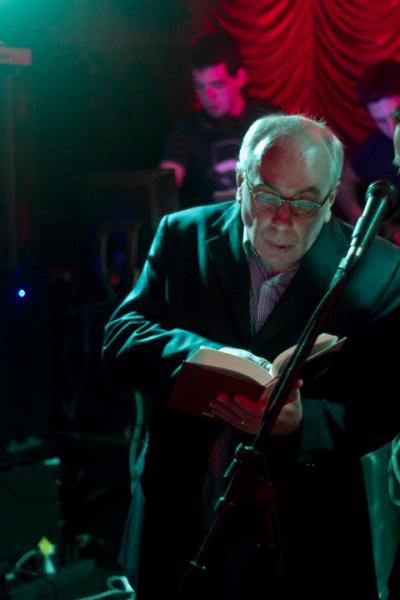 Régis Bonvicino (São Paulo, 1955) is a Brazilian poet, translator, literary critic, and editor. (My photo from 2008.)

Bonvicino edited one of the main Brazilian poetry anthologies of the last decades, Nothing the Sun Could Not Explain (Los Angeles, Sun & Moon Press, 1997). His collection of 1970s letters with poet Paulo Leminski was published first in 1991, with an introduction by Caetano Veloso. In the 1970s, Bonvicino edited Poesia em Greve, Muda and Qorpo Estranho (with Julio Plaza). In 2001, he founded Sibila, a literary magazine that published eleven print issues. Sibila went digital in 2007.

As a critic, he has written for the newspapers Folha de S. Paulo, O Estado de S. Paulo, and Jornal do Brasil; and in magazines such as Veja and Istoé.

Among the critics who have written about his work are Alcir Pécora, Haroldo de Campos, Boris Schnaiderman, João Adolfo Hansen, Silviano Santiago, Marjorie Perloff, and Julio Castañon Guimarães. About his recent book, Estado crítico, Alcir Pécora has written: “I do not see any other poetry that makes a more implacable criticism of poetry and — at the same time — restates itself as poetry. This happens not because Bonvicino’s books speak of poetry or theorize about the crisis of poetry, but because they tactically move around poetry’s impasses and implant themselves into a ground where their verses occupy the metropolis’s most hostile paths.”

LINKS:
Sibila
Bonvinco and me: “Palin/McCain and the Cult of Irresponsibilty” (2009)
Close Listening conversation with Bonvicino.
“Poetry in a Time of War and Banality” — series in Brazil cocurated by Bonvicino (Lehto, Dragomoschenko, and “traitor to the movement” images (translator/traitor).