Todd Swift on All the Whiskey in Heaven in Poetry London, Summer 2013

Wildly Light on his Feet: Todd Swift on  a poet's bracingly flamboyant disregard for lyric proprieties. 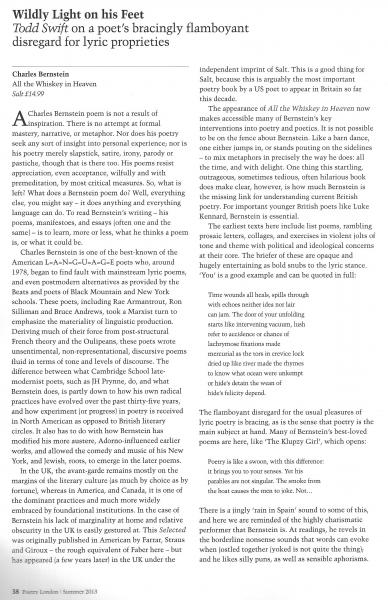 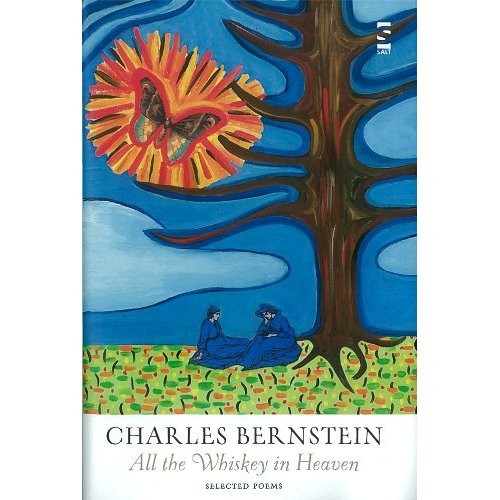 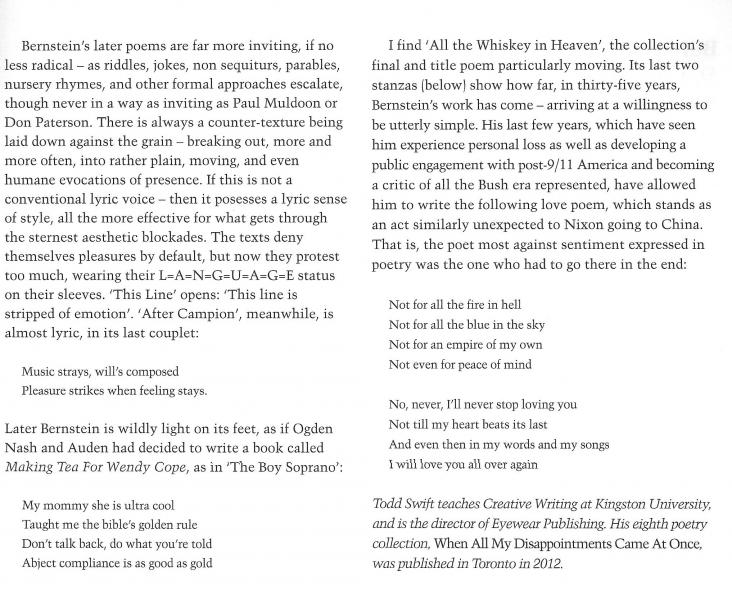 A Charles Bernstein poem is not a result of inspiration.  There is no attempt at formal mastery, narrative, or metaphor.  Nor does his poetry seek any sort of insight into personal experience; nor is his poetry merely slapstick, satire, irony, parody or pastiche, though that is there, sometimes, too.  His poems resist appreciation, even acceptance, by most if not all mainstream critical measures, willfully and with premeditation.  So, what is left?  What does a Bernstein poem do? Well, everything else, you might say – it does anything and everything language can do.  To read Bernstein’s writing - his poems, manifestoes, and essays (often one and the same) - is to learn, more or less, what he thinks a poem is, or what it could be.

Charles Bernstein is one of the best-known poets of the American L=A=N=G=U=A=G=E Poets, who, around 1978, began to find fault with mainstream lyric poems, and even postmodern alternatives as provided by poets of the Beats and poets of the Black Mountain and New York schools.  These poets, including Rae Armantrout, Ron Silliman and Bruce Andrews, took a Marxist turn to emphasize the materiality of linguistic production.  Deriving much of their force from post-structural French theory and the Oulipeans, these poets wrote unsentimental, non-representational discursive poems fluid in terms of tone and levels of discourse.

The difference between what Cambridge School late modernist poets, such as JH Prynne, do, and what Bernstein does, is partly down to how his own radical practices have evolved over the past thirty-five years of his hugely influential and increasingly public career, and how experiment (or progress) in poetry is received in North American versus British literary circles.  It also has to do with how Bernstein has modified his more austere, Adornoesque earlier works, and allowed the comedy and music of his New York, and Jewish, roots, to emerge in the later poems.

In the UK, the avant-garde remains mostly on the margins of the so-called mainstream (as much by choice as by fortune), whereas in America, and Canada, it is one of the dominant practices, and much more widely embraced by foundational institutions.  In the case of Bernstein his lack of marginality at home and relative obscurity in the UK is easily gestured at – this Selected was originally published in America by FSG – the rough equivalent of Faber here – but has appeared (a few years later) in the UK under the independent imprint of Salt.  This is a good thing for Salt, because this is arguably the most important poetry book by an American to appear in Britain so far this decade.

The appearance of All the Whiskey in Heaven now makes available many of  Bernstein’s key interventions into poetry and poetics. It is not possible to be on the fence about Bernstein. Like a barn dance, one either jumps in, or stands pouting on the sidelines –– to mix metaphors in precisely the way he does, all the time, and with delight. One thing this startling, outrageous, sometimes tedious, often hilarious book does make clear, however, is how much Bernstein is the missing link for understanding current British poetry. For important younger British poets like Luke Kennard (also from Salt) Bernstein is essential

The earliest texts here are list poems, rambling prosaic letters, collages, and exercises in violent jolts of tone and theme, with political and ideological concerns at their core.  The briefer of these are so opaque as to be hugely entertaining as bold snubs to the lyric stance.  ‘You’ is a good example and can be quoted in full:

Time wounds all heals, spills through
with echoes neither idea nor lair
can jam.  The door of your unfolding
starts like intervening vacuum, lush
refer to accidence or chance of
lachrymose fixations made
mercurial as the tors in crevice lock
dried up like river made the rhymes
to know what ocean were unkempt
or hide’s detain the wean of
hide’s felicity depend.

The flamboyant disregard for the usual pleasures of lyric poetry is bracing, as is the sense that poetry is the main subject at hand.  Many of Bernstein’s best-loved poems are here, like ‘The Klupzy Girl’ which opens:

Poetry is like a swoon, with this difference:
it brings you to your senses.  Yet his
parables are not singular.  The smoke from
the boat causes the men to joke.  Not …

There is a “rain in spain” sound to some of this, and here we are reminded that the highly-charismatic performer that Bernstein is. At readings he revels in the borderline nonsense sounds that words can evoke when jostled together (yoked is not quite the thing); and he particularly likes silly puns, as well as sensible aphorisms.

Bernstein’s later poems are far more inviting, if no less radical – as riddles, jokes, non sequiturs, parables, nursery rhymes, and other formal approaches escalate, though never in a way as inviting as Paul Muldoon or Don Paterson. There is always a countervailing against the grain counter-texture being laid down – breaking out, more and more often, into rather plain, moving, and even humane evocations of presence. If not a conventional lyric voice – then a lyric sense of style, which, as with much work that is based on restrictions, is all the more effective for what gets through the sternest aesthetic blockades. The texts deny themselves pleasures by default, as a matter of course, but now they protest too much, wearing their L=A=N=G=U=A=G=E status on their sleeves.  ‘This Line’ opens: “This line is stripped of emotion.”  The word stripped excites our interest, and emotion is introduced. ‘After Campion’ , meanwhile, is almost lyric, in its last couplet:

Later Bernstein is wildly light on its feet, as if Ogden Nash and Auden had decided to write a book called Making Tea For Wendy Cope, as in ‘The Boy Soprano’:

My mommy she is ultra cool
Taught me the bible’s golden rule
Don’t talk back, do what you’re told
Abject compliance is as good as gold

I find ‘All the Whiskey in Heaven,’ the collection’s final and title poem particularly moving. Its last two stanzas (below) show how far, in thirty-five years, Bernstein’s work has come –– arriving at  a willingness to be utterly simple, and seemingly against all he represented, before.  His last few years, which have seen him experience personal loss, as well as a public engagement with post-9/11 America, and becoming a critic of all the Bush era represented, have allowed him to write the following love poem, which stands as an act similar to Nixon going to China. That is, the poet most against sentiment expressed in poetry was the one who had to go there in the end:

Not for all the fire in hell
Not for all the blue in the sky
Not for an empire of my own
Not even for peace of mind
No, never, I’ll never stop loving you
Not till my heart beats its last
And even then in my words and my songs
I will love you all over again

All the Whiskey in Heaven page at EPC: reviews, links, recordings, about the book 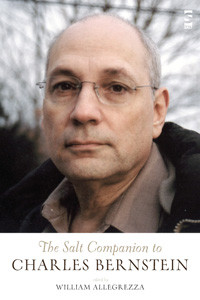