My mother's father, Edward Kegel, was a Brooklyn real estate developer in the 1910s and '20s.  He died of a streptococcus infection in 1927, when he was 39 and my mother. Sherry, was six. My grandmother, Birdie, who got married in 1916, never remarried. Both my mother's parents were born in Russia. My grandfather came to America when he was two.  Birdie came here when she was seven, after her mother died, making the precarious journey from Russian to New York on her own. She joimed the step-family of her father, who had abandoned her and her mother when he made the journey to the New World. 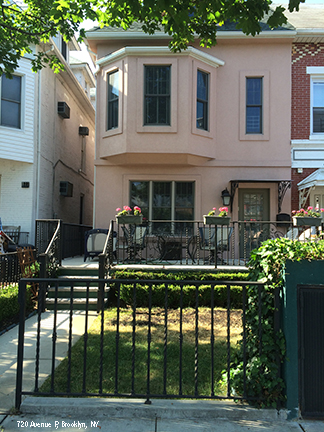 My mother's family lived at 720 Avenue P in the Midwood section of Brooklyn. After my mother graduated James Madison High School, she and her mother moved to 25 Tennis Court, in Ditmus Park; they could no longer afford the house left by my grandfather. They both moved to the Upper West Side of Manhattan in 1945, when my mother got married. It's the neighborhood I lived in for most of my life.

My grandfather left school in 1903, when he was 14 (in 1903).  His first job was as an office boy in a title company. In 1912, when he was 23, he and a partner started their own firm, with offices in Park Slope; he later had offices on  State Street and Court Street in downtown Brooklyn. Edward Kegel was featured in a 1925 book, Building Up Greater Brooklyn, with Sketches of Men Instrumental in Brooklyn's amazing development by Leon Wexelstein. The book focussed on Jewish developers.  My grandfather's property holdings were extraordinary (including the southwestern corner of Court and Pacific) but every square foot was swindled from my grandmother by her half-brothers, leaving my mother and grandmother to get through the depression on a meager allowance provided by the relatives.

A pdf of the section on Edward Kegel in Building Up Greater Brooklyn is here. It includes this mid-20s assessment of Brooklyn's promise: "Kegel is a fervid enthusiast about Brooklyn, feeling that, notwithstanding the amazing growth it has already had, there still are many untapped possibilities."

See also my "Autobiographical Interview" from My Way.