Thanks to Erik Redling and Burkhard Meyer-Sickendiek for organizing Beyond Metrical Prosody: New Rhythms in US and German (Post-) Modern Poetry at Freie Universitat in Berlin. The lively discussion underlined the value of this German/American exchange. I was grateful to learn more about the poetry and short lives of Rolf Dieter Brinkman (1940–1975), as presented by Jan Röhnert, and Rainer Maria Gerhardt (1927–1954), presented by Agnes C. Müller. Brinkman translated O’Hara and Berrigan. Olson and Creeley wrote poems for Gerhardt (recordings on PennSound), the editor of FRAGMENTE, a prescient magazine that included them both: MP3 — Olson reading “To Gerhardt, There, Among Europe’s Things …” in Berlin in 1966 and MP3: Creeley’s 1956 reading of “For Rainer Gerhardt.” 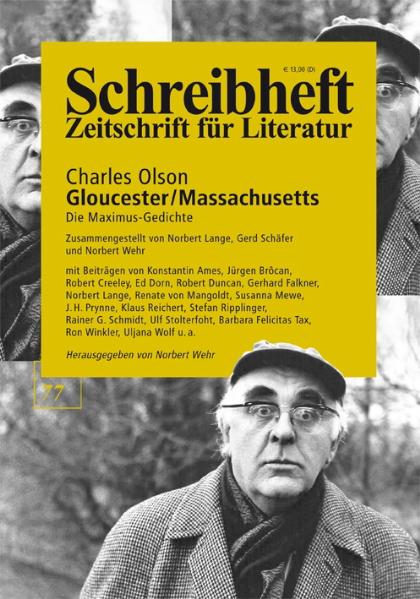 Meyer-Sickendiek talked about Walter Höllerer (1922–2003) and his adaption of Olson’s “Projective Verse,” which, while inspirational, also introjected an organicist and masculinist metaphysics of orality that not only threatens to undermine Olson’s considerable prosodic achievements but also averts the most radical dimensions of a twentieth-century poetics of sound. But as Meyer-Sickendiek emphasized it was precisely the freedom of  (the idea of) “breath” that helped to break from the constraints of hide-bound verse practice in Germany. Perhaps against Olson’s “breath” we might think of Susan Howe’s palimpsests or Mackey’s stuttering and ciruclar breathing. Perhaps against Olson’s “breath” we might place Celan’s “atemwende” (“breathurn” in Pierre Joris translation). Meyer-Sickendiek speculated to me  in an email after the conference that perhaps Celan’s 1967 title is an allusion to Olson, given that Höllerer’s intervention began in Berlin, in 1965. Monika Schmitz-Evans (who was unable to attend) submitted a paper on Ernst Jandl and his Cage connection; I kept thinking of Jackson Mac Low in relation to Jandl and also Marjorie Perloff’s essays.

While these papers focused on German/American exchanges and intersections in the 1950s and 1960s, they raised the issue of the brevity of such exchanges and their being limited to men and also exclusively to American poets of English descent. And then there is the relative lack of German/American exchange on innovative poetry after that, until recently, with (the sadly defunct) Luxbooks translations of, for example, H.D., Guest, Keith Waldrop, Armantrout, and Gizzi and specifically Norbert Lange’s translations of Oppen, Ashbery, and Rothenberg. (Lange and I will be talking about our collaborations, and our Luxbook, at the Berlin Poetry Festival in a few days.)

Stephen Fredman made a convincing case for the fundamental parallels in the approaches of Olson and Dewey, poetics and pedagogy, noting how rarely this comparison has been made. Later he recounted to me that Zukofsky had studied with Dewey and that he modeled his American accent on him. I love the idea that Zukofksky's American accent is modeled on Dewey. 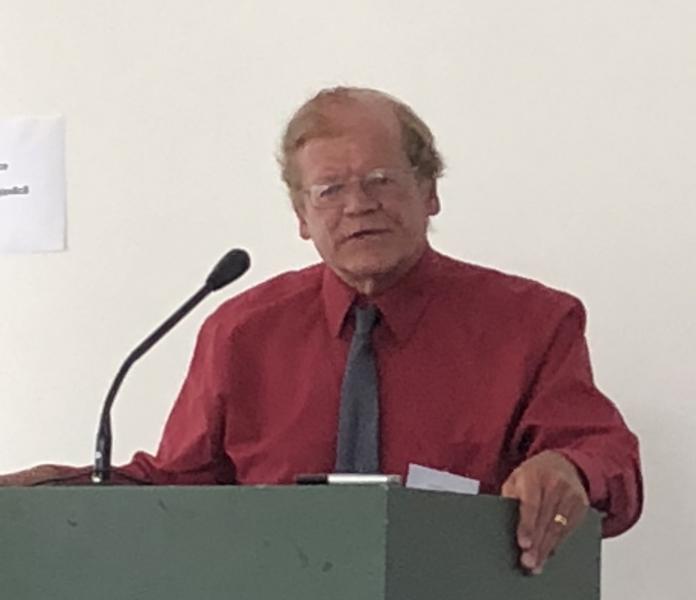 songs and the poetry of nonnative English speakers — and their decendents — as to Whitman-Dickinson-Mallarmé thought. (Stein’s Melanctha is from about the same time as Lowell’s dialect verse.) Relevant to this point, Richard Cureton (pictured) brought the full power of his multilevel prosodic theories to Langston Hughes’s “Harlem Sweeties,” showing a dazzling amount of ingenuous  patterning in this short poem. As he wrote me in an email about the versatility of his remarkable “temporal poetics,” it “looks across all levels of structure in rhythm, language, rhetoric, and meaning,” taking into account “genre, texture/development, symbolism, speech acts, syntax, morphology, meter/paralanguage, intonation, prolongation, grouping, visual form, etc.”

Jonathan Culler discussed Frost’s initiations of free verse in ostensively metrical poems and then intimations of Frost in Ammons.

Perhaps the oddest talk, with the exception of mine, was Sascha Feinstein’s study of poets who, under the umbrella of jazz, use received/closed forms in an aversive relation to both free jazz and free verse. On the one hand hand, I thought of Tracie Morris’s wild fantasy on a double sestina, “Boating Douzetuo,” but also her sound exchanges (what she calls “handholding”) with Schwitters’s “Ursonate,” a signal work of German/American poetry exchange. On the other hand, I felt the necessity of discussing this subject in the context of the radical prosodies of Mackey, Coolidge, Mullen, and Foster and in the light of the iconoclastic rhythms of Cecil Taylor. (My talk was about homophonic translation and “sound alike” “sound/writing.”)

The first night we had a lively discussion of sound archives such as PennSound and the great Lyrikline with me and  Lyrikline’s manager, Heiko Strunk. Burkhard Meyer-Sickendiek spoke about the rhythmicalizer — a digital tool he has been developing to identify features of nonmetrical poetry (see featured image above). 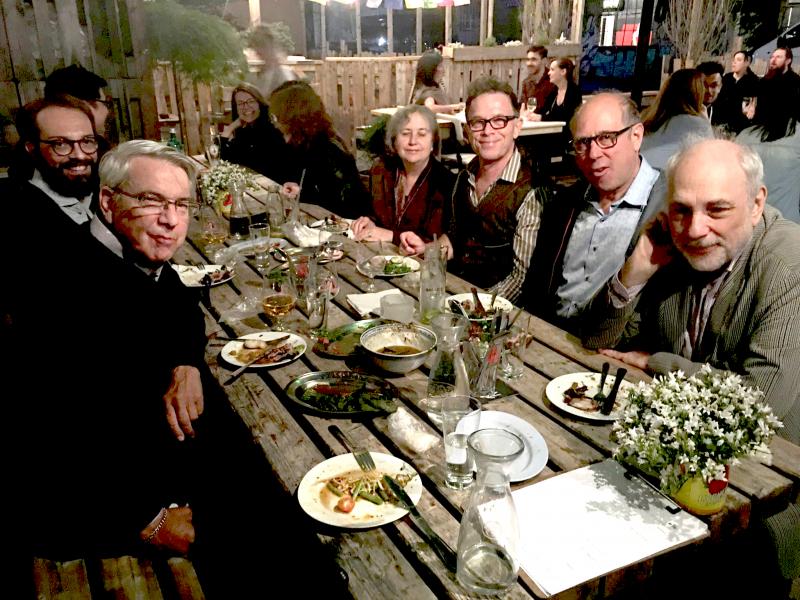