I read this last night at the Poetry Project memorial for Ted Greenwald. 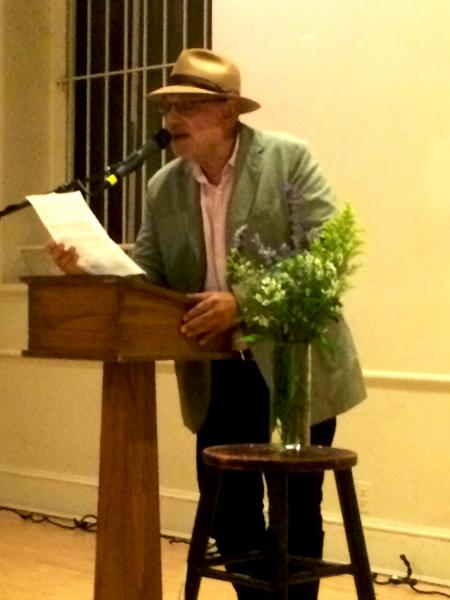 I first met Ted Greenwald in 1975, in and around the Poetry Project. He was my guide to much of what interested me among the local poets: he never hesitated to say what he liked and didn’t in the poems and people around us. It’s not just that he didn’t suffer fools easily, but he was hilarious in skewing pretenses and false premises. We always had a good time talking, with my indirectness dancing with his blunt wisdom like two people doing the cha-cha on the point of a fountain pen.

We started to meet for very long lunches, in the early years at the Queensborough Bar and Grill, near the bridge, with its hot trays of corned beef and potatoes, eating pickles and drinking whiskey. We talked so much that we decided to tape 17 hours of conversation throughout 1977, sometimes hanging out at Ted and Joan Simon’s place on Bleeker. ] I’d like to share those tapes, but the conversation is still too salty for public consumption.

Ted always said we lived like rich people because we had our time to ourselves: he was working delivering the Village Voice once a week and I was on and off unemployment. For Ted, free time, making time free, time to write and think and talk, that was everything.

And that never changed.

In our conversations, Ted would often speak of his college friend Lorenzo Thomas and his most immediate fellow traveler, Tom Raworth.

Ted Greenwald’s poetry has the down-to-earth feel of the spoken woven into dazzling patterns. While some poems seem off the cuff, his later work is as intricate in its phrasal repetitions as a Persian carpet. Greenwald's poems often have a no-nonsense, shoot from the hip, hard-boiled style, as if he is speaking with you on the most intimate terms. But this substrate is overlaid with a crystalline, multicolor lacquer. His Jewish accented vernacular speech is sounded out as musical tones, rough edges made exquisite in the alchemy of his poetry, which spins base materials into precariously shimmering fabrics. Greenwald’s poems are airy and contemplative, ambient and rhythmically intoxicating. There are no intimations/imitations of depth here: words skim pages like stones skipping on the water’s surface.

Ted was so very happy for his two new Wesleyan books, the reprint of the masterpiece selected Common Sense and the collection of uncollected poems, Age of Reasons.

During the period of his illness, Ted was stoic. He’d tell me what was happening with his killer progressive disease, but never dwelled on it, never complained. He was always making time to write. This is what he loved to do and when he did it he felt like he had entered paradise.

In July of 2015 we started on a collaboration, which we continued until June 11, just six days before he died.

Ted and I exchanged lines back and forth over email, sometimes multiple times in a day and never less than every few days. After a while neither of us could fully separate what each had done, we were blowing together, back and forth in a duet of, and as, time, bouncing off the moment as if it were a trampoline, tripping out into the eternity of the company, from dark to delight. There was no sense of unnecessary limit, no register we couldn’t play. The experience was of freedom within the constraints we made up intuitively for each poem,

The Course is about 300 ms pages and is dedicated to Tom and Val Raworth.

The one thing Ted ruled out was anything that would frame the work in terms of his dying, though he was homebound and in the final months in hospice, under the supernal care of Joan McCluskey and their daughter Abby. Once I suggested the title “God’s Silence.” No way, said Ted, none of that shit. Use No Hooks was his motto. The Course was not about imminent death; it was a way of making the words we exchanged leap to life.

Ted Greenwald sung the commons and danced with a homely grace American poetry has rarely seen.

No more wasted
Or cunning
Than is come again