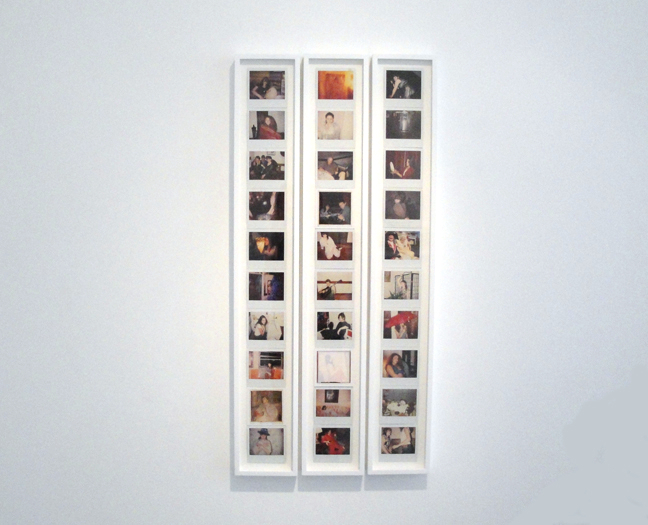 The show runs through June 25th. Susan Bee and I will be at the gallery for Bushwick Open Studios on Saturday, June 2, from 2-5pm. On Monday, June 18 at 7pm, Henry Hills will be showing a new 80-minute cut of his film, Emma's Dilemma;  we will be there for that too.

I wrote this essay for the show:

Believe me, if all those endearing young charms,
Which I gaze on so fondly today,
Were to change by tomorrow and fleet in my arms,
Like fairy wings fading away
Thou wouldst still be adored, as this moment thou art,
Let thy loveliness fade as it will …
––Thomas Moore (1808)

Susan and I found Emma’s Polaroids after she died. They were dispersed throughout her effects in her Chicago apartment. As if we were gathering the limbs of Osiris, we put these images in a box and took them home, along with an overwhelming number of photographic prints, negatives, and digital images, many more than we could possibly have imagined Emma had fabricated.
In the years since, we have worked with Emma’s close friend and collaborator, Antonia Pocock, to organize the several distinct bodies of work that Emma created between 2001 and 2008, including the early black and white photographs, the “Masquerade” series, a darker set of night scenes, “extreme” self-portraits, Chicago land- and city-scapes, the epic GirlDrive portraits and landscapes, and the final Venice pictures. 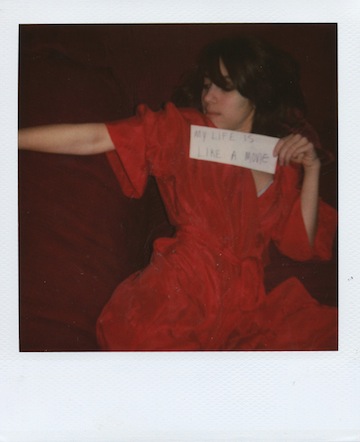 Phong Bui, artist, curator, writer, and publisher of the Brooklyn Rail had seen some of Emma’s photographs from Masquerade: A Retrospective her first posthumous solo show, which took place at the DOVA gallery at the University of Chicago in 2010. The show was curated by gallery director Kat Griefen, and  Emma’s photography teacher at the University of Chicago, Laura Letinsky. Pocock made an enthralling slide show for DOVA, which is the best representation of her work overall. Bui organized another  solo show at the Janet Kurnatowki Gallery, which he curated with Linnea Kniaz, organizing the work, mostly from the “Masquerade” series, into compelling groups of related sets. The show, which took place in 2011 was called  Emma Bee Bernstein: An Imagined Space. A key to Bui’s understanding of this work is that the power does not reside just in the single image but takes on greater aesthetic power when seen in constellations within each distinct body of work as well as in the connections among the distinct bodies of work.
After the show, Bui expressed an interest in Emma’s Polaroids, which I had not yet been able to look at closely. One afternoon, he came over to our Upper West Side apartment and Susan handed him the box. After slowly going through the 200 works in that box, he told us we must have a show of these Polaroids and that he would be willing to curate it. It was great that Elle Burchill and Andrea Monti, of the Microscope Gallery, agreed to host the show in their Bushwick, Brooklyn space.
Emma had several cameras that she used – two digital cameras, a Nikkormat 35 mm (that Susan used in the 1970s), her favorite Mimaya Double Lens C330 Professional, and her Polaroid Spectra 2. She thought of the Polaroids as a distinct body of work. Pocock, the best guide to Emma’s working methods, explains: 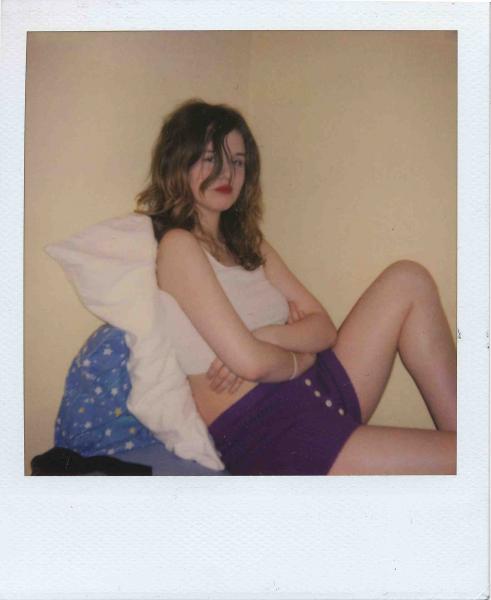 I recall her being interested in the particular quality of Polaroids as distinct from other types of photographs, the heightened materiality of them, the nostalgia they evoke. Also, she didn't always use the Polaroid camera on her “Masquerade” photoshoots. She seemed to reserve it for specific moments, though I am not sure exactly what the logic was behind that choice.

While there are a few studies for her “Masquerade” series in the full set of the Polaroids, these images have a more intimate, documentary feel than her other photographs. As with all Emma’s portraits, they are a cross between fashion and art, staged and spontaneous, personal and iconic.
Bui first proposed calling the Polaroid show Wherever Angel’s Go, from my poem of that title, with the refrains “Won’t you show me the way to go home” and “I've been searching for you so long.” Once we decided to also show Emma’s later, darker, film, Exquisite Fucking Boredom, it made more sense to use her own title. Emma’s film is a kind of purgatory, but shot through with radiant light, not a place of pending judgment but of pending possibility.
Our family friend Mimi Gross, who has made portraits a central part of her paintings and drawings, once explained to me that portraits are more about a relation between the artist and subject than about a representation of the person pictured. This is how I imagine Gross would separate out portraits that have an aura and those that are only resemblances. It’s the difference between looking and seeing. 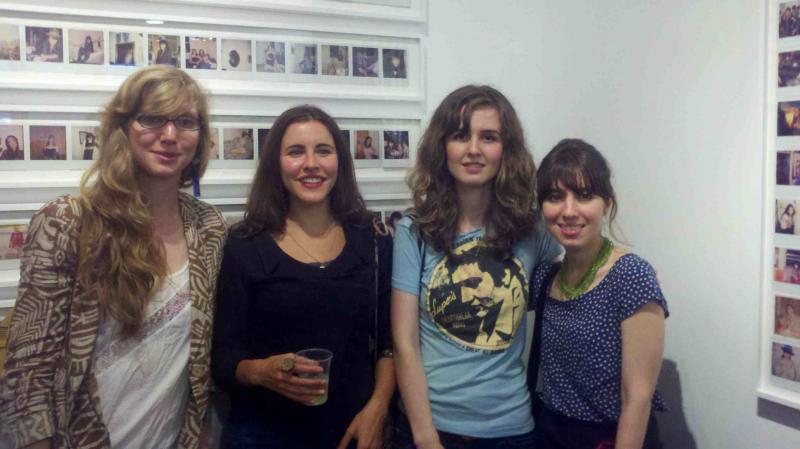 Emma’s photos are all about seeing, but for Emma seeing always involves the mark, even the scar, of looking. This is why for her tableaux – the staging of costume, background, configuration of bodies – remains a ghostly outline, overcome by her subjects’ ineluctably enduring young charms.
In the Polaroids, the “endearing young charms” of innocence and spontaneity overcome, without erasing, the reification of fashion and the aestheticization of tableau (the way the photo evoke the compositional integrity of a painting). And no more so than in the many images of Emma in the Polaroid series, perhaps less self-portraits than portraits of the artist in different guises, each image a fantasy of a different life. Pocock describes the circumstance of making the Polaroids, in particular the images of Emma herself:

Typically Emma would conceive of the image and then have a friend shoot it for her. Emma's photoshoots were very collaborative in that she would shoot her models, and then have her models shoot her. … She understood each photoshoot as a performance involving both photographer and model, and was interested in investing her models with a certain agency, with the result being that traditional notions of authorship were problematized.

The Polaroid series was made between 2003 and 2007, with most of the images from 2003. These serial works exhibit a rigorous informality. Emma transforms the spontaneous, on-the-spot Polaroid aesthetic into a generational portrait of a hyper-self-conscious, sweetly and playfully disengaged young women and men taking on adulthood with deadly serious abandon. While indebted to the photography of Robert Mapplethorpe, Andy Warhol, Robert Frank, Nan Goldin, and Cindy Sherman, Emma’s work is distinguished by the aura of “beauty and youth” that illumines her subjects and her insistence on fantasy over personae or documentary. Her Polaroids glow with the fire of life lived in full knowledge of its gorgeous evanescence. Emma knew this: “The perfect projection of the internal imagined self, if it exists," she wrote, "only does so for the duration of the photographic performance.”

And around the dear ruin each wish of my heart
Would entwine itself verdantly still.
It is not while beauty and youth are thine own,
And thy cheeks unprofaned by a tear,
That the fervor and faith of a soul can be known,
To which time will but make thee more dear.

Emma lays bare the medium of the Polaroid as notches in time that burn a hole in eternity. Her many self-portraits, along with portraits of her friends, cast aside the masquerade of her tableaux photographs for ecstatic moments ripped from the space between bathos and the sublime. The constellation of these images, more than any single one, has a talismanic power to transform the fleet, flickering ruins of youth into unfulfilled wishes. 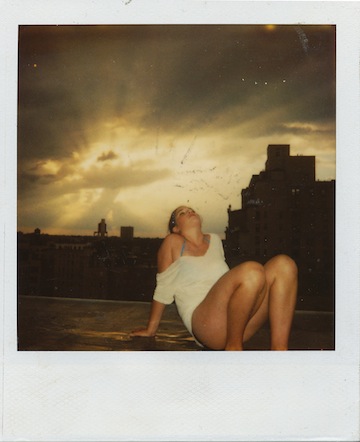 Photographs collected in a box, souvenirs of a life lived with an intensity eclipsing longevity. My relation to the images, and my invoking Thomas Moore’s sentimental Irish drinking song, are misrepresentations of these works, which resist the nostalgia that they evoke for me. Emma’s works are filled with pranks, feints, neo-pre-Raphaelite gender bending, coy flirtation, insouciant ennui. But all that just intensifies their work as enduring charms. Time heals nothing; these photos are open wounds. Each Polaroid is the mark of a stolen moment, not the faded one depicted in the photographs but the one I lose anew each time I go from seeing to looking. This is what makes these Polaroids amulets for a journey not home but nowhere, sparks of angelic light in and as an enduring present.

No, the heart that has truly loved never forgets,
But as truly loves on to the close:
As the sunflower turns on her god when he sets
The same look which she turned when he rose. 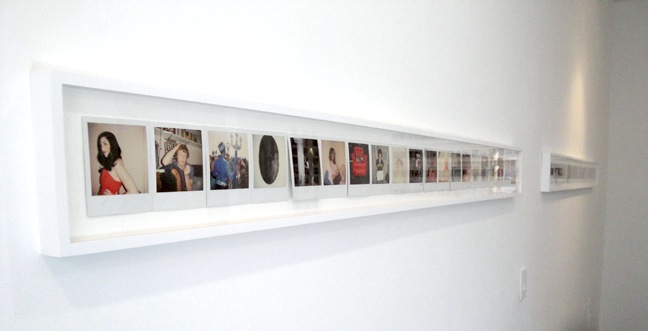