From September 29 to October 1, 1989, the Literary Center at Royaumont, outside Paris, put on the first conference devoted to the American Objectivist poets. Emmanuel Hoquard and Rémy Hourcade were the organizers. Carl Rakosi came for the event (seeming startled to be the last surviving member of a grouping about which he had often tenuous connections), along with Michael Davidson, Lyn Hejinian, Michael Palmer, Stephen Rodefer, and David Bromige. There was a large audience of French poets and critics. (Niedecker was not officially featured in the program, a regrettable omission that was often noted at the event.) 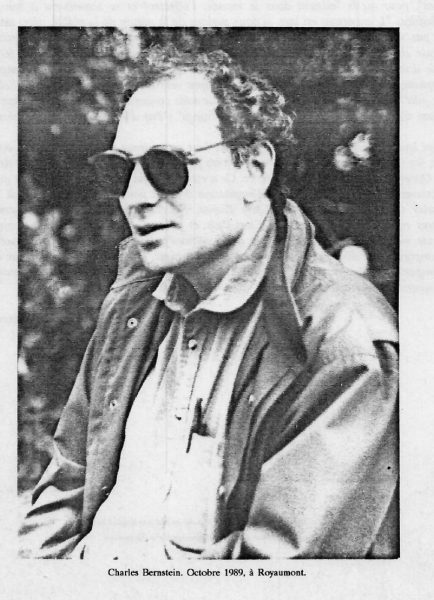 Fall 1989 was my first semester teaching at Buffalo — as a visiting professor. I flew direct from Buffalo to Paris for the event, which was a magnificent tribute to the these poets. It’s remarkable that these four great Second Wave modernist Jewish American poets received the first grand tribute of this kind in France, not in the US.

After several more years of work, my talk on Reznikoff became “Reznikoff’s Nearness” (first published in Sulfur and later collected in My Way). In this early talking version, Emmanuel Hoquard gives a long introduction, and I am simultaneously translated (with commentary!) by Pierre Alferi. A pamphlet transcribed from the talk was later published as Notes 3.

Recording via PennSound of talk, with Hocquard intro and Alferi translation (1:32): mp3