My mother died 7pm Saturday night. It was a peaceful death. She died in her own bed with no complaints at 97. Even in her last months, she maintained her uncannily stellar appearance. After it became difficult for her to walk outside, we suggested she use a walker or wheelchair. “Absolutely not!,” she said. “I would look like an old person.”

Her final year at home, with no homecare workers, was made possible by the devoted care of my brother, Edward, and my sister Leslie, as well as their spouses, Donald and Myriam, who join us here today with Sherry’s grandchildren, Kerrie, Kyle, Felix, and Kate, and great grandchildren, Sasha and Shelby, remembering also my daughter Emma, who died almost ten years ago.

My mother’s death was peaceful, but earlier last Saturday, the day Sherry died, there was the very unpeaceful death of Rose Mallinger, also 97, in a Jewish gathering place like this, at the Tree of Life synagogue in Pittsburgh, murdered for being Jewish, alongside Richard Gottfried, Jerry Rabinowitz, brothers Cecil and David Rosenthal, Bernice and Sylvan Simon, Daniel Stein, Melvin Wax, and Irving Younger.

For them, and for all we mourn, let us recite the Kaddish.

Affection for my mother went well beyond the family. Indeed there were several distinct sides to my mother: I think certainly for her children she was a different person than she was to those who knew her as an aunt, grandmother, or indeed as the Baroness — and more recently as a charismatic presence at Silver Sneakers, her elders gym group, many of whom are here today. Speaking to so many of her friends this week has been a transformative experience for me.  Some of these aspects of my mother will be presented by our speakers today.

12. The Baroness: picture and video gallery

Picture the scene. December 12, 1945, the war just over: Sherry Kegel, 24, marries Herman Bernstein, 41. My mother’s favorite song plays: “I Married an Angel” by Rogers and Hart, sung by Nelson Eddy. In the 1941 move, a secretary turns into an angel and marries a rich man. Listen: MP3 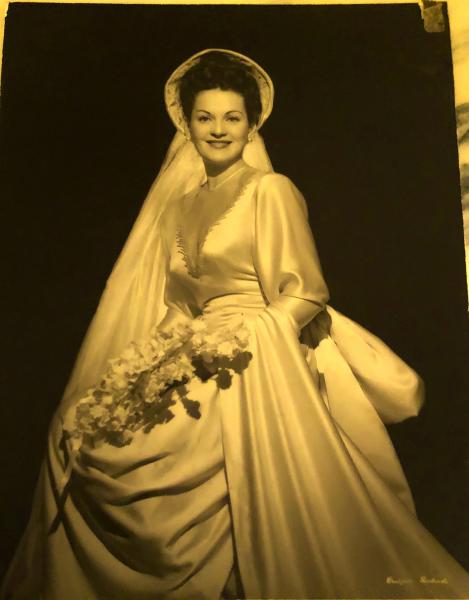