Tom Raworth's As When: A Selection, forthcoming from Carcanet 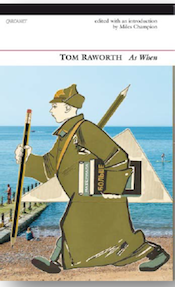 As When is the selection I have waited for—the whole spread of a great poet’s work.- Fanny Howe

Tom Raworth’s mind has from the start been quick as a weasel, moving fast to the nub of the matter with a vivid trace of words on the run and in cool balance across their gathered darts. So adroit are these motions that they leave no residue along the edges or like some cloud above the centre; it’s quite hard to implicate an author or presiding opinions because the profile is not blurred by such moody shadows. The mode across a lifetime’s work is acute accuracy, of thought and its acoustics, the ear for the whole sez you performance, with wit by turns acrid and generous, total resistance to self-parade. - J.H. Prynne

As When spans the range of Tom Raworth’s poetry to date, and includes work omitted from his Collected Poems (2003) as well as poems previously only issued as fugitive cards and broadsides. This edition of Tom Raworth’s poems is beautifully arranged, with an introduction to his life and work long overdue.

Tom Raworth was born in London in 1938. Since 1966 he has published more than forty books and pamphlets of poetry, prose and translations. His graphic work has been shown in Europe, the United States and South Africa, and he has given readings of his poems worldwide: most recently in China and Mexico. In 2007 in Italy he was awarded the Antonio Delfini Prize for Lifetime Achievement – although he is not yet dead, but living in Brighton.