Television before the golden age — pre-internet, before streaming, and way before Asian Americans enjoyed substantive roles as reasonably flawed human beings and protagonists — is also a subject of Tan Lin’s ambient novel Insomnia and the Aunt, which blends fiction and multimedia memoir to deliver the portrait of an enigmatic relative who may or may not be real.

Like many poets, I consume large quantities of television, bingeing on excellent and dumb shows as a way to wind down after teaching or writing or other emotionally drafting activity. Poets, of course, are not the only people who do this, TV being the centripetal force that it is and that it has been for nearly a century.

What is a prosodic device?

In 1970, Hannah Weiner exhibited a telegram in Oberlin College’s conceptual art survey Art in the Mind. After the “mail strike,” her letter to Virginian Dwan was delivered to the gallerist (page one and page two). In it Weiner complains that Vito Acconci’s telegram-piece should be exhibited in Language IV along with Walter DeMaria’s telegram, arguing that the medium was immaterial, and that the artwork, in either case, consists in its sphere of reference. So that there could be no redundancy involved. She cites her piece at Oberlin.

But she might have also claimed more significance for the telegram. A primitive speech-to-text technology, it is a phonic ticker, defamiliarizing the otherwise imperceptible but crucial transfiguration that takes place between sound-image and thought.

Words inappropriate to the (p)age

What is a derelict void?

What does “museum studies” mean by “context”? What if it were “museological environment”? An artwork would be out of context until it was taken out of context. But what does it mean to take an object out of context? Or a non-object? It must be a kind of displacement that is more historical and geographical than it is temporal and spatial. Because the time of the piece must unfold in a serviceable manner, and the space must be arrayed contiguous to its virtuous features, the features that display “it,” the approximate museological environment conserves period and style. Old is good. “Modern” is bad, except as a paradigm. By paradigm here is meant “real-to-ready phenomena,” the kind that make my encounter with the object contemporaneous to it.

One of the ways an experience of time is produced in poetic contexts requires engaging our body's memories, such as how we hear a sound. The way sound decays in a space, or how it moves and dimishes across a duration of time, engages our ability to take note of the unfurling present moment. It's a particular attention, fixated on a deeply embodied phenomenon that reinvigorates our ability to locate ourselves in the world. To invoke a sound is to invoke the body in present time.

I find this link between sound, the present, and the body richly explored by Tan Lin's digital poem, “Echo,” archived at UbuWeb. An echo reflects sound waves back to the listener, often in a diminished manner. 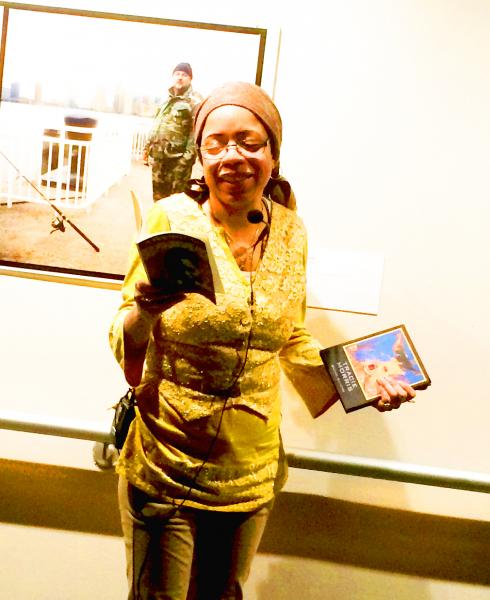 A question for Angela Genusa

Angela Genusa is someone I have only known from afar, via Facebook and email, but I’ve been excited about her work as it engages the relationship between computer programming and writing. This, as other pieces in this column will reveal, is an in-mixing of generic aptitudes I’m excited by. Genusa is one of many writers producing works that would otherwise be impossible without the computer. She’s also the author  of a statement (as a facebook status) we like in my household, “from now on people will have to be more interesting than my iPhone,” or words to that effect. Her focus on, knowledge of, and artistic uses of technology have continued to interest me, and I think poets working in that direction are opening up all kinds of possibilities for writing, even for those of us who are less tech-savvy. Genusa’s latest project, which she describes below, is a bibliography of her spam box. I could have asked her about bibliography as a formal choice (and that’s a topic people like she and Tan Lin are interested in, so maybe one day I’ll stage a forum on the topic) but what is there to say about spam? So I asked her: Why spam? Here’s her answer:

A question for Tan Lin

Installment 2 of “WHY?” in which I ask certain people Why questions and they answer in 100-300 words. Beside Trisha Low, the other first person I had a Why question for was Tan Lin. I have been enthusiastic for years about his genre-diffusing, multi-platformed work under the auspices of poetry. For the last several years each new work from Lin operates like a "demo" that stages an exchange between various genres and platforms.