PoemTalk travelled to Bard College, where we gathered with Charles Bernstein, Pierre Joris, and Bard’s own Joan Retallack to talk about Jackson Mac Low's Words nd Ends from Ez (1989). The project was composed in ten parts, one part each for sections (sometimes called “decades”) of Ezra Pound’s lifework, The Cantos. We chose to discuss the penultimate part of Mac Low's diastic written-through work, a poem based on phrases, words, and letters drawn from — and in some sense about — Pound's near-final cantos, Drafts & Fragments of Cantos CX-CXVII.  Mac Low’s constraint, for which he preferred the term “quasi-intentional” to the term “chance,” involved the letters forming the name E Z R A  P O U N D.  Words, phrases, and letters were extracted from the original cantos based on those letters and on their placement within words. Charles, Pierre, Joan, and Al Filreis explain this in detail, although we cannot quite agree as to whether Mac Low was being absolutely strict in the application of the diastic method. As Bernstein notes several times, this particular procedure is one of the more complex Mac Low used. Nonetheless, it’s the sense of the group that when semantic meaning seems to be created, it has about it, as Pierre Joris happily notes, the special pleasure of serendipity, and means all the more.

Thus the poem’s commentary on Pound, its both aesthetic and ethical positioning with respect to Pound, is profounder than it might have been otherwise, had the poem been a “sincerely felt” subjective lyric response to the final Poundian ethos — an oscillation between stubborn repetition of earlier modes and mea culpa.

We couldn’t help thinking about John Cage’s writings through Pound in connection with this work. During this part of the discussion Joan Retallack said the following:

Mac Low admired Pound more than Cage did. One of the things that was, to me, so always intersting about the way Cage worked was that he thought out his procedures very carefully in advance, not so that he would know what was going to happen in the parts of the structure that would allow chance operations to choose the points, as he would put it, in the text, but because he knew the way you choose your procedure has a lot to do with extremely formal elements ultimately. He chose to let more of Pound in [more, that is, than Mac Low does based on his procedure in our poem] and this was ultimately more unpleasant for Cage because he didn't like the Pound. I think the reason to continue reading Pound and to continue the agonistic relationship we all have to have with Pound when we read [him] is that it is such a presentation of the complexities and the horrifying things that can happen to a mind that is going in directions that are passionate without empathy, without contact with others. 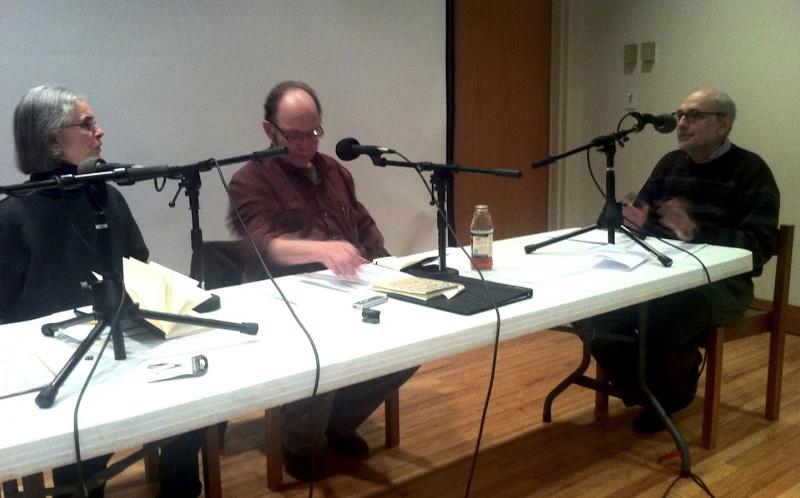 Notwithstanding the agonism, and a non-Freudian/non-Bloomian version of anxiety of influence, Pierre Joris takes us back to the great pleasure we derive from the performance of this poem, with its multilinguistic melodrama, its playfully exaggerated accents — perhaps part of the rejoinder to Pound as a matter of sense but perhaps, too, a result of the joy of bespeaking words extracted from the languages of The Cantos, mostly liberated from its topical tyrannies. “This is sound work that frees the poem from a heavy logos,” says Charles. “I think the important thing,” says Pierre, “is that it has to be heard first. And it has to be read aloud. ‘Hey read that. Get your mouth around it.’” And we agreed on the primacy of Mac Low’s performance as a somatic experience.

We are grateful to Joan Retallack and her colleagues at Bard College for arranging our recording session, and to the audience of some 40 students, faculty, and others who made up a positively responsive live audience for only the second time in PoemTalk’s run (the other was PoemTalk #10 on Stein). We also wish to thank James LaMarre, our longtime director-engineer, who travelled from Philadelphia to Annandale-on-Hudson to help us with the recording; and, as always, Steve McLaughlin, PoemTalk's original editor.