Knar Gavin, Anna Vitale, and Sophia DuRose joined Al Filreis in the Arts Café of the Kelly Writers House to discuss a three-page section of Leslie Scalapino’s “‘Can’t’ is ‘Night’” — the passage having been chosen by the poet for It’s Go in Horizontal: Selected Poems, 1974–2006. Our recording of the poem comes from a May 17, 2007, episode of Charles Bernstein’s series Close Listening. It requires close listening indeed, and a somewhat distinct encounter of seeing the poem as text. Scalapino does have a remarkable talent for sounding out words she has put in quotation marks (can you hear them here?). Crucially, she sounds out linebreaks too: listen for the break between “character” and “night” in “separation of character and / night.” After all, “night exists at day — but is not the same night so / night is not-existing.” 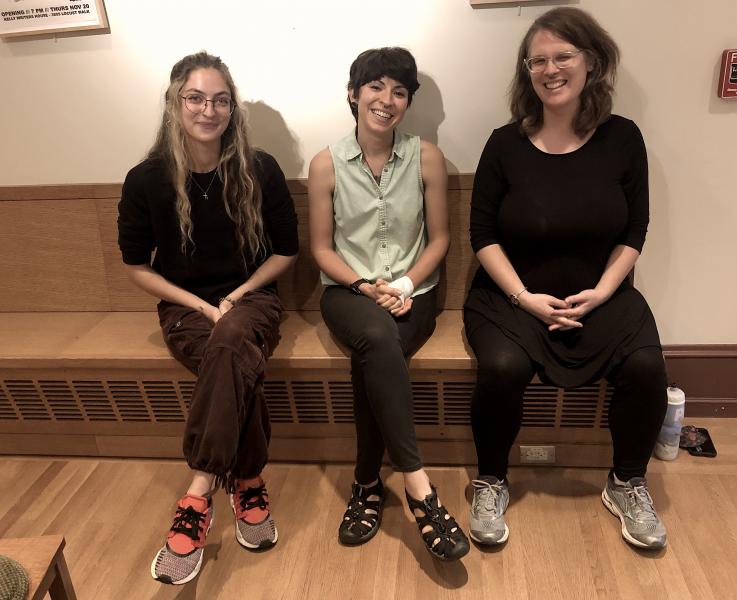 Key words and short phrases are put in single quotation marks, for instance “terror,” “lie,” “dis-placing,” “no language.” And even “we” — as if to be scared off through distance-achieving scare quotes or air quotes by collective (national/istic) claims. Once the poem situates displacement in wartime Iraq, and specifically in a scene of military atrocity (“woman going down — ‘the chick was in the way’”), the problem of all colonizing language, “as words label space,” can be witnessed on the ground of applied terroristic antiterrorist rhetoric. [Pictured above, from left: Sophia DuRose, Knar Gavin, Anna Vitale.]

Close listening and close reading: surely some manner of these, both, are required by every Leslie Scalapino work. The PoemTalk group sought to respect this in the very way in which they moved through the poem’s nonsequential parts and themes and offering of language problems. The poem is utterly political and supremely theoretical at once. No orderly proceeding through the poem beginning to end, nor any confident sense of the poem’s tone (about its borrowing of words and phrases), would disclose those remarkable qualities. So, called upon by the poem’s “dis-placing” of its own parts, the group ventures toward its front lines, and then back again behind them. What “can’t” this poet do?

PoemTalk this time — an in-person recording session at the Kelly Writers House, technically no easy matter at the pandemic-constrained moment of its making — was engineered and directed by Zach Carduner with assistance from Leah Baxter. And it was edited by Zach Carduner. Thanks to our colleagues at the Poetry Foundation for the belief in the value of this series. We express sincere gratitude to Nathan and Elizabeth Leight for the support of PoemTalk, and to the staff of the Kelly Writers House for making (and indeed defining) the space.