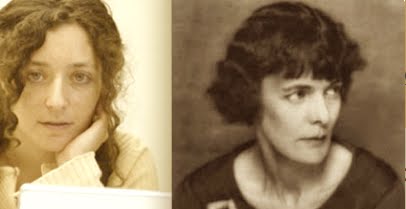 For this episode of PoemTalk, we took the show on the road — to Chicago — where David Pavelich hosted us at the Regenstein Library of the University of Chicago, a favorite haunt of an archive-obsessed Al Filreis over many years. (The Modern Poetry collection includes, of course, the papers of Poetry magazine up until 1962 or so, among other gems.) Thanks to David for hosting us! We were joined by Don Share and Judith Goldman, and we talked about two poems, one written through the other: H.D.’s “Sea Poppies” and Jennifer Scappettone’s “Vase Poppies.” Here’s H.D.’s “Sea Poppies” (1916):

Amber husk
fluted with gold,
fruit on the sand
marked with a rich grain,

treasure
spilled near the shrub-pines
to bleach on the boulders:

your stalk has caught root
among wet pebbles
and drift flung by the sea
and grated shells
and split conch-shells.

Beautiful, wide-spread,
fire upon leaf,
what meadow yields
so fragrant a leaf
as your bright leaf?

Lavenderish dusk
strapped for stays,
pomegranates under the rubberband
chucked for a glass Oz,

letdown
splayed by the pillar-shelves
to page upon the ottoman:

his talk has wrought suit
amid citrus gapes
and pall dunked in the bowl
and grated sage
or cleaved clear paleo-pines.

Postgeist, upcast
California upon weed,
what banker yields
so fragrant a cant
as this vagrant cant? 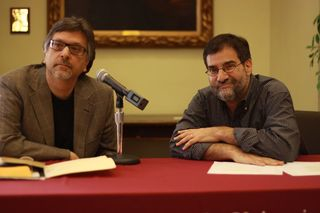 Scappettone wrote through H.D.’s poem, substituting words but always keeping to parts of speech. She echoes the original at certain moments, creating some rhymes and in a few cases what amounts to a homonymic (“husk”/“dusk”) and quasi-synonymic translation (“sought root”/“wrought suit”). The poem is a meta-commentary on imagism, a way of decorating or over-elaborating H.D. whose imagistic lines convey a “piety that veers into preciosity” (the poet’s phrase).** Conch-shells become paleo-pines. “Fire on leaf” becomes “California upon weed.” “Vase” can rhyme with “maze” or with “Oz,” depending on your class. (Scappettone has introduced the poem at readings sometimes by mentioning this valence, seeming to contribute to the notion that it is a commentary on imagism’s social preciousness.)

Photo above and at left: Don Share and Al Filreis taking questions after presentations on the work of Poetry editor Henry Rago — in Chicago at a conference hosted by David Pavelich held after we recorded this episode of PoemTalk.

** Quoting from an email sent to Al Filreis by Jennifer Scappettone.