PoemTalk took its show on the road this time. Al Filreis convened with Maria Damon, Catherine Wagner, and Kaplan Harris in Greenwich Village, New York City, before a wonderfully responsive live audience, to talk about two poems Kathy Acker inserted into the middle of her novel Blood and Guts in High School. These are poems written “by” Janey Smith, the 12- or 13-year old central character of the story. Those with copies of the book will find our two poems on pages 103 and 105: “The Diseased” and “The Slave Trader” (or “To Slave Trader”). Texts are presented here, below. The novel was published in 1978, and on November 13 of that year Acker read with Lorenzo Thomas at the Ear Inn as part of the Segue Series. She performed our two 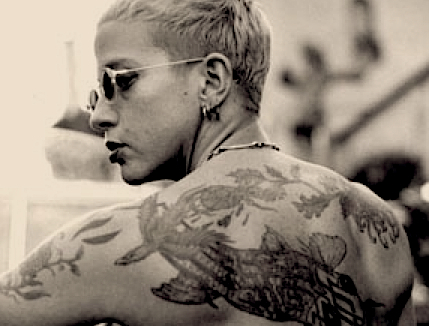 poems in addition to excerpts from Janey’s “Persian Poems,” as well as several other pieces. As we listened to “The Diseased” we included Acker’s introduction, in which she fascinatingly — and in character, you might say — sets up the context for the intrusion of these poems into the prose of the novel.

The book is more than a novel, of course, as we note. It is a mash-up of different genres, and at one point the group creates a long and even then incomplete list of the genres at work. Moreover, Acker invites us to wonder if she herself is a mash-up. The poems are translations of the love elegies of Sextus Propertius. They are at points so literal that Janey/Acker preserves the Latin word order in the English. Janey says elsewhere in Blood and Guts that translation is a crying out in response to pain. Janey has written a book report on Hawthorne’s The Scarlet Letter and the text of the paper is included (of course) in the novel. It is, the group observes, a perfect summary of the text yet written in “the monosyllabic, resentful, crude style” of the heretical proto-punk girl.  Acker turns Hester into Janey and there you have it: the punkification of the sort of internal exile Hawthorne was exploring. Referring to Dimmesdale as a fool, Janey writes: “Teach me a new language, Dimwit. And language that means something to me.” That impulse to want to recreate language in the context of eros and taboo, and of the social underworld, is a utopian aim to which Acker dedicated her life and work. “The whole thing about punk,” Maria Damon notes, “is that you do brilliantly ambitious things very stupidly.” Our discussion keeps returning to the details of the amazing effects created by this disjuncture. 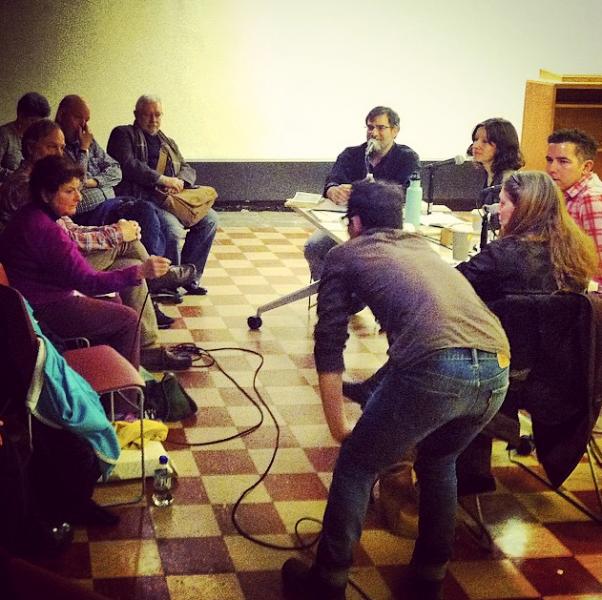 We are delighted to add to the main PoemTalk session a bonus track — nine minutes of conversation with the audience, an excerpt from the open discussion that followed the main session: MP3.

This live-audience PoemTalk was recorded at the Hudson Park Library branch of the New York Public Library at 66 Leroy Street in lower Manhattan, where librarians have been serving the entire public without any discrimination since 1906 and where Marianne Moore worked as a library assistant from 1921 to 1925 (her commute to the job was a total of 42 steps). We are grateful to Alexandra Kelly and Miranda Murray of the NYPL staff. PoemTalk’s regular director and engineer, Zach Carduner, traveled to New York from Philadelphia with all his equipment, set up elaborately and skillfully obtained a clean sound despite some acoustical challenges. What challenges remained in the initial audio were met by the talents of our now-regular editor, Amaris Cuchanski.

The edition of Blood and Guts in High School we used — the pagination of which we refer to in the discussion — is the 1984 Grove Press book, identical in its hardcover and paperback editions (the hardcover ISBN is 0-8021-3193-X). Here is the text of the poems as they appear in the novel:

Are you really crazy, doesn’t you my love mean anything to?
Do you think I'm than icy more frigid Illyria?
To you so valuable, whoever she is, does that girl seem
That without me controlled by the winds to go you want?
You hear can the raging of oceans under bridges,
brave? on hard cold floor how to sleep you can know?
you, delicate and scared, survive chills and frosts
you can, not used to the slightest snow?
Let winter's be double the length of solstice
let be dead ‘cause of late the sailors Pleiades
let no your from the Tyrrhenian be freed ropes muck
let not unfriendly my throw away winds pleas!

But, let there be no double winter dead winds,
if you on a speeding carry away the waves ship
from me prisoned on this empty and allow shore
you horror with clenched to threaten wrist.

But whatever happens whatever I, horror, you owe,
I hope Galatea brings you luck
may be sailed-by Ceraunian cliffs by oar felicitous
let in Oricos with calmness.
Me no one will take away from you
but I, life, in front of your house bitter puss will keep screaming
and not I may fail ever sailor to ask passing-by,
‘Tell me, in what port in prison my boy is?’
and I will cry, ‘It’s possible on Atracian he's set down shores
or it's possible in Hylaeia, he my future is.’

I want all of you out there to shut up.
I'm going to live the ways we want to live.
What do you want of me now?
Liver, blood, guts?
The only thing left is madness.

My man isn't like other men.
He can keep you in prison.
He can make you do anything.
I know why all of you want him.

But worse, what happens
if my Slave Trader
for some stupid reason
happens to like you?

Then you’re screwed:
no more sleep
Nor will he let you keep your eyes.
He compulsions alone can fetter forces wildness.
How many times a spineless being you'll run to

all the weaky friends you formerly despised,
tremulous sorrow will arise with tears shuddering
warts and pimples and fleas’ll appear on your skin
all your wishes’ll go, words are no more,
you'll never again now who you are.

You'll learn to serve him, girl, to be whatever he wants,
to disappear whenever he wants you to go.
You'll learn why people who want, want to die
why the whole world are lies.
Your rich parents ain't helping:
cause Love's more powerful than social climbing.
But if even small you have given footsteps of your failure
how quickly from such a reputation you will be a murmur!
Not I then I will be able to comfort to bear to asking you

‘Cause I'm sick too.
At this point sicker than you.
My disease is forever.
I know no comfort.
Since we're both maniacs,
let’s be nice to each other.
I myself want to live.
I want to burn.
all I ask is no one loves me
in return.