For PoemTalk we chose to talk about the “Monday” section of The Weather, and invited (shown left to right in the photo at left) Rachel Blau DuPlessis, Kristen Gallagher, and Michelle Taransky to gather at the Kelly Writers House for the purpose. The group discusses the way in which a poetics can derive from meteorology and its importance in contemporary culture and history. We variously observe how the language of the poem brings together pastoral poetry, meteorological prose, Anglo-centric subjectivity, the Wordsworthian problem of sincerity, and the cloudy concept of the universal.

Robertson has written and spoken with remarkable cogency about the project, and certainly the quality of our discussion owes a great deal to her own suggestions and analysis. Before she began reading from the typescript at PhillyTalks, she gave this 3-minute introduction. And here is a relevant excerpt from an essay she wrote before a Washington DC reading — “The Weather: A Report on Sincerity,” a piece mentioned and quoted several times during the discussion:

I'm interested in the weather. Who isn’t? We groom for the atmosphere. Daily we apply our mothers' prognostics to the sky. We select our garments accordingly; like flags or vanes we signify. But I'm interested in weather also because cultural displacement has shown me that weather is a rhetoric. Furthermore, it is the rhetoric of sincerity, falling in a soothing, familial vernacular. It's expressed between friendly strangers. I speak it to you. A beautiful morning. You speak it back. The fog has lifted. We are now a society. To say insincerity is foreign to weather is precise. Weather is the mythic equilibrium of the social, rising and falling in the numbly intimate metres of the commonplace. For a long time t 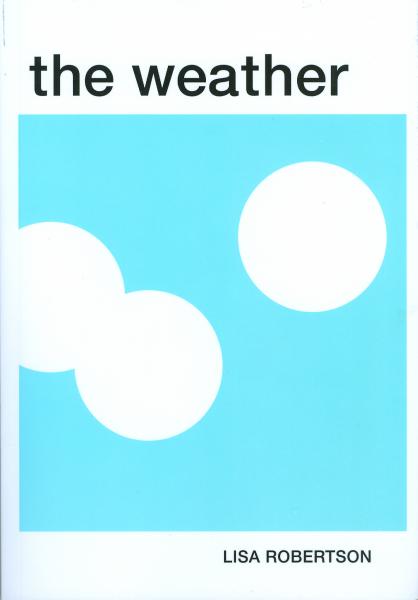 he rhythm’s opaque to the stranger. Haltingly you begin to sing, during the long cab ride from the airport, the long chorus of place. You enter a new weather, an unfamiliar system of sincerity. You learn it by example. You begin to adjust, to settle; put in order; regulate. But you are a spy in sincerity. The real knowledge of weather is indigenous.

Should it come as a surprise that Britain's most profitable television export is not costume drama but weatherporn? Weatherporn. An atmospheric condition dallies with some lives and we drink its lusty spectacle from the screen. Description pries up, frees itself, briefly phatic, expresses a gestural plenitude, framed by but untied to the sociality of objects. This loosening is diction as rhythm. It crosses borders. The weather becomes a flickering social prosody. As it abstracts into rhythm it becomes commodified, universal. Really. It was a fireball, right through the front door, and out the back.

PoemTalk #65 was hosted and produced by Al Filreis, engineered by Steve McLaughlin, and edited (as every PoemTalk has been since #1) by Steve McLaughlin. The text of the “Monday” prose-poem from The Weather has been made available, with permission, at the Poetry Foundation site. The text of the Robertson-McCaffery PhillyTalks event is here. At the end of the PhillyTalks reading, Robertson and McCaffery interviewed each other, and took questions from the audience; that session was recorded and is available here. A video recording of the entire event was made and is extant only in RealVideo format. (PhillyTalks was hosted by Louis Cabri and engineered by Aaron Levy.)