Charles Alexander, 'Near or Random Acts'

Reaching 35 years of age, the father of two young children, Alexander had decided to constrain his writing about daughter Nora, then 7 years old, through a 5x7 (5x7=35) structure: 5 words in a line, 7 lines in section – the numbers referring thus to the phases of life of both poet and beloved addressee. In early September his progress on the Nora poems was suddenly stopped by “non-poetic doings” (as Al Filreis puts it in the introduction to this PoemTalk), and when Alexander returned to the series he keenly felt the need of additional constraints. The first poem in the series written after 9/11 added a third and rather severe limitation: first initials of each word in each line in the 5x7 form would now have to spell T O W E R. For instance: “Try our waffles early riser.” A few songs later we find the dad attending to his daughter again, now at a girls’ soccer game. Then, later, in 66, we reach a seven-line remembrance of a pre-9/11 raspberry-picking excursion, an idyllic late-summer outing that had been reported in an earlier section. So by this point what Ron Silliman calls “the raspberry suite” of Near or Random Acts sections has begun and ended with that ordinary but memorable dad/daughter experience. 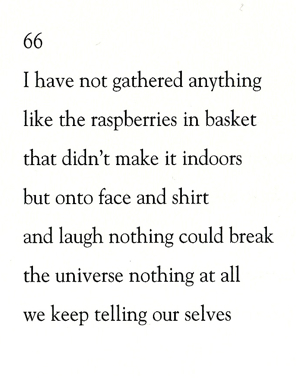 Al Filreis brought together Mark Nowak, Ken Jacobs and the aforementioned Ron Silliman to talk about this suite of sections of a book Ron calls, in the end, a masterpiece. (Each of Alexander’s books, Ron says, launches a “dramatic and complete project.” Alexander has a special “relationship with each work as a project” that Ron finds personally instructive.) Ken notes that our choice of this particular group of sections from the long poem — sections 56 through 66 — discloses a theme that is just one of several running throughout the volume. Yet, he adds, this particular theme is powerful and central to the work: the thin, inexpressible boundary separating domestic and public lives, the crossing of which threatens the intimacy and joy of a parent’s protective private embrace of his daughter in a time of political anxiety. Looking back to the sections immediately preceding the crisis, Ken finds section 56 – the first raspberry canto – full of “horrific foretelling.” Mark, pondering Alexander’s line “never such a thing as return” (57), remarks on the reader’s realization here of the father’s sense that one “can’t go back to innocence.” The furious dramatic irony created is unlike that in most post-9/11 writing, for here again was a project already underway (even with its reference to a “plane” in the last pre-9/11 section): the writer of those sections experienced the calm of not-knowing in a way readers, coming later, simply cannot. We simply come upon a man out with his child, picking berries. “The space that only you can build” in canto 60, which Alexander re-reads with great emotion a decade after the crisis, in 2012, bespeaks the poet’s hope for his poem: that it will stand as a convergence of paternal and civic legacy, a future message to its addressee, then too young to know. The poem, with its many nods to children’s verse and at the same time its indebtedness to the quasi-nonintentional chance writing of Jackson Mac Low, is designed to be just such a space, the hoped-for republic of random yet near (intimate, close) words.

PennSound’s Charles Alexander page includes several readings of Near or Random Acts, each of which is segmented so that one can listen poem by poem. For more about the Gil Ott celebration, including links to recordings, click here. PoemTalk was recorded and engineered this time by Chris Martin, produced by Al Filreis, and edited, as always, by Steve McLaughlin. PoemTalk is a collaboration of PennSound, the Kelly Writers House, the Center for Programs in Contemporary Writing, and the Poetry Foundation. We at PoemTalk wish to honor the memory of Gil Ott, to celebrate the ongoing work of Chax Press, and to thank Charles Alexander for taking time during the summer of 2012 to re-record, so feelingfully, all of the Nora sections of his book.  (Pictured above, from left to right: Ron Silliman, Ken Jacobs, Mark Nowak.)