Cut from the same tongue (PoemTalk #57)

When Gregory Djanikian’s book, So I Will Till the Ground, was published in 2007, it was celebrated at the Kelly Writers House. (Later a Writers House podcast was released to give a sense of the event.) Al Filreis gave an introduction (MP3) as did one of Djanikian’s students, Sam Donsky (MP3). Djanikian read the hilarious “Immigrant Picnic” (MP3), a poem from the part of the book dealing with the life of the poet's family after the genocide left many of his forebears dead and dispersed the rest to places like Alexandria, Egypt, where our poet was born. Most of the book, indeed, deals with the effects many decades later of the Armenian genocide (or “Meds Yeghern,” the great calamity). But the first poems in So I Will Till attempt to represent mass killing. Among them is a poem Djanikian also read that night in 2007: “Armenian Pastoral” (MP3), the poem we discuss in this episode of PoemTalk.

It is more focused on the linguistic capacities of traumatic memory than any other poem in a book that is nonetheless full of consciousness about the relationship between genocide and naming.

At left, from left to right: Peter Balakian, John Timpane, Jamie-Lee Josselyn. To discuss this poem, and more generally the problems attending the making of verse “about” genocide, PoemTalk brought together Jamie-Lee Josselyn, who has helped teach a course on representations of the holocaust for many years; John Timpane, poet and editor of the commentary page at the Philadelphia Inquirer; and Peter Balakian. Balakian’s own story of a poet's life grappling with the history and effects (and denials by others) of the Armenian genocide he has told in numerous books — in poetry and prose.

We took advantage of Peter’s trip to Philadephia (from Hamilton, New York, where he teaches at Colgate University), and organized a poetry reading that took place just a few hours after we recorded this episode of our podcast. The entire audio recording (MP3) is available at the Kelly Writers House site (here). This episode of PoemTalk was convened and produced by Al Filreis, as always, and edited, as always, by Steve McLaughlin. 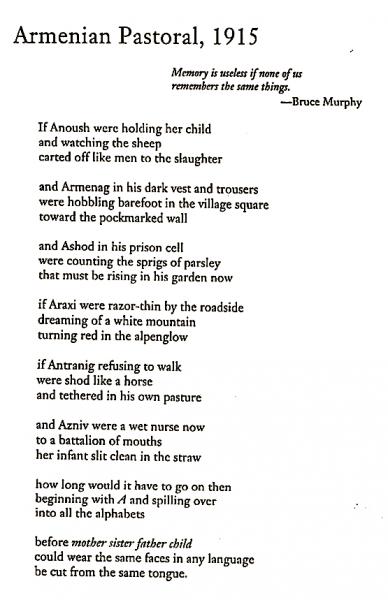