Dreams not spoiled by roaches (PoemTalk #93)

Corina Copp, Laura Sims, and Richard Deming joined Al Filreis in the Wexler Studio of the Kelly Writers House to talk about one of Helen Adam’s poem-songs, “Cheerless Junkie’s Song.” PennSound’s Helen Adam page consists (so far) of three items. First, a full recording of the 1977 performance (aired on WBAI radio) of the 1963 lyric play called San Francisco’s Burning. Second, a recording of Adam being interviewed by Susan Howe and Charles Ruas on Pacifica Radio in the late 1970s. And, third, our poem, “Cheerless Junkie’s Song”: Adam performed the piece on film, in Ron Mann’s documentary Poetry in Motion (1981). 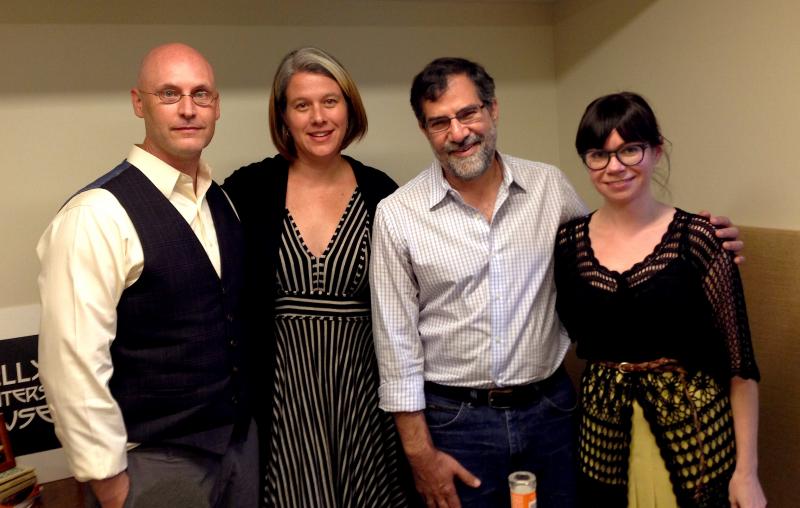 The group first tackled the major question of whether and how the ballad form can be integral to Beat poetry and poetics — and/or to politically and aesthetically resistant poetry generally. The answer, we concluded, was certainly yes, but in a manner as eccentric and counter-intuitive as Helen Adam herself.

Then we pondered this junkie’s song. The junkie seems to track the well-trodden course influenced by Manifest Destiny, downtown New York City (after escape from the suburbs) to San Francisco (and perhaps back again). This is the course of the Beat language and lifestyle, and the song-poem follows closely as that movement goes off the road, as its figure becomes the degenerate “poet type” gawked at by passers-by seeking to be freaked out by the freaks. On this point it seemed to the PoemTalkers that Helen Adam was offering a deep formal critique of the formless (or, anyway, anti-formalist) Beat mode, as she attempted to cajole it — via Allen Ginsberg for instance — back to a properly irrational history of the dark ballad. Such carefully perfected irrationalism might have spared the junkie his particular negative directionlessness.

We happily felt the need to recommend Kristin Prevallet’s editorial work on Adam, especially in The Helen Adam Reader. Corina also described her own visit to the Adam manuscripts in the Rare Books and Manuscripts Department of the State University of New York at Buffalo. Adam is one of those poets whose work is often difficult to behold only on the page, and that might be one of several reasons why she is not better known.

This ninety-third episode of PoemTalk was engineered by Zach Carduner and Ivana Kohut and was edited by the very same Zach Carduner.

Seeking love upon a day,
A day of summer’s pride,
I left Long Island’s suburbs
For the Lower East Side.
The train it roared and thundered,
And I sang above its scream,
There’s a cockroach coming towards me
But it cannot spoil my dream.
Love! Love! and l.s.d.
It shall not spoil my dream.

Blue moonlight over Tompkins Square.
“Drop out, tune in, turn on.”
The village all around me,
And Long Island’s suburbs gone.
In a pad far down on Fourth Street Soon
I welcomed the approach
Of the rat that loves the twilight,
And the nimble footed roach.
Love! Love! at eventide,
The grey rat and the roach.

I’m always where the action is.
I blow my mind all day.
While on Long Island’s tennis courts
The bland suburbans play.
And I was born suburban!
Who would ever credit that?
No chick who saw me frugging
With the cockroach and the rat.

It’s Ho! for Horse, or methedrine
To spark the swinging mood.
While rats run up my trouser leg
Roaches share my food.

Rats and roaches nuzzle me
When it’s dark and hot.
Love! Love! It’s all the same
Mixing Speed and Pot.
First a rat, and then a roach,
Or both as like as not.
If I can’t find a fix tonight
My marrow bones will rot.

Goodbye transcendent Tompkins Square
I haven’t long to stay.
A double jolt of heroin and I’ll be on my way.
Let rats and roaches bury me.
They’ll bury me in state,
As they march from Verrazano Bridge
Down to the Golden Gate,
Clear across the continent.
Yonder let me lie,
In the gutters of Haight Ashbury,
To freak the passers by,
Till all the tourists gape, and say,
“Brother! He died high!”
Let rat tails write my epitaph.
Brother! He died high!

The above screenshot from Ron Mann’s Poetry in Motion has been reproduced by the Poetry Foundation web site in Daniel Nester’s interview with Ron Mann (2012).

HERE is an abridged, 20-minute version of this episode.