Michael Golston, Danny Snelson, and Sarah Dowling joined Al Filreis this time to talk about two short poems by P. Inman from his book at.least. (published by Krupskaya in 1999). The poems are “lac[e]y.” — dedicated to Tom Raworth — and “reception. theory.” — which is “for Diane Ward.” The text of the poems is available as a downloadable PDF, and the book is described and available here. Recordings of Inman reading the two poems, made in 2005, are available at Inman’s PennSound page and as follows:

Sarah and Al in particular found Inman’s presentation at PhillyTalks #14, curated by Louis Cabri and produced by Aaron Levy in November 1999, to be relevant to the at.least. poems. Inman’s paper, presented on that occasion (a double reading and talk pairing Inman and Dan Farrell), is called “Notes on Slow Writing.” The text is available, and here are several propositions from “Notes” that seemed to help us understand the “overpunctuation” of the poems: 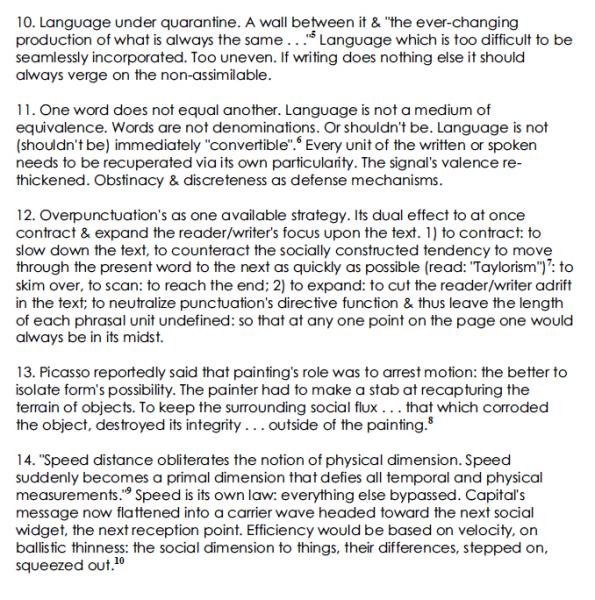 Michael was fascinated with the title “lac[e]y.” — noticing, as Sarah also did, that it’s in part a reference to the saxophonist Steve Lacy (who has collaborated with Tom Raworth) and in part a way of describing the form of the poem: “almost like a lacing,” Michael says, “there’s a sense that you 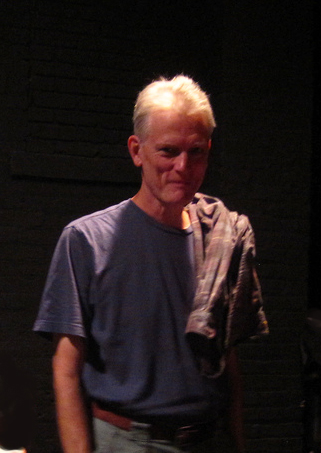 could visualize this as laced, the lines lace together and unlace, and so on.” Danny, interested as always in textual variants, identifies possible vertical readings. Yes, the poem can be read downward. “What’s nice about the poems,” says Danny, “is that they leave a space open for readers to read the poem as they would like.” That the poems, as printed, sit close to the gutter and “hang on the page” in a certain manner, “further destabilizes things.”

Steve McLaughlin is our editor, as always, and James LaMarre was the director and engineer for this forty-ninth episode. PoemTalk is a collaboration of the Center for Programs in Contemporary Writing, the Kelly Writers House, PennSound, and the Poetry Foundation. We are grateful to Michelle Taransky, Jessica Lowenthal, Mingo Reynolds, Chris Martin, Chris Mustazza, Stephanie Hlywak, and Catherine Halley.