Al Filreis brought together Abdulhamit Arvas, Dagmawi Woubshet, and Carlos Decena to talk about one of John Ashbery’s very early poems. “Some Trees,” preceded only by “The Painter” among verse written when Ashbery was an undergraduate at Harvard that the poet chose to keep and publish later, was written during the evening of November 16, 1948. Ashbery was just twnety-one years old. PennSound’s Ashbery page includes several recordings of him reciting this poem. For PoemTalk we chose a version performed during an interview conducted by John Tranter in Sydney while Ashbery was in New York — subsequently edited by Tranter and aired on the Australian Broadcasting Corporation’s show “Radio Helicon” on June 19, 1988. Ashbery always read this poem as diffidently and unsurely as he does while talking with Tranter. 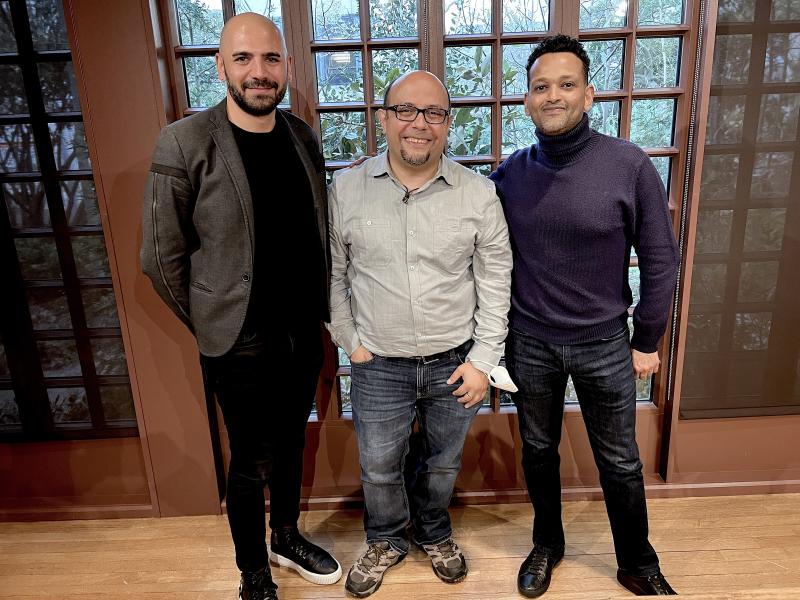 Halfway through the conversation, Dag begins to describe the speaker’s foray among or into the protective natural space of the trees as an act of cruising. This, Carlos and Hamit readily agreed, helps explain the hierarchy of activity: first touch, then love, then later explain. This is not a poem in which even the people explain things. The trees are expressive models of unlanguaged amazing embodiment, putting on the “still performance” that strikes the exciting balance between the intentional and chanced-upon relationship. Meaning is a form of joining — is predated by it. That “merely being there / Means something” becomes for Ashbery a queer language theory. Primary is what is unmeant. The poem itself is a later explaining, a post facto witnessing. It records the touching and loving that necessarily precede it, but does not itself entail such touching. Thus the “reticence” of these words (“these accents” on the page we read). But there is no shyness about the meet-up. Poems must purport to invent comeliness — supposed lyric originality (what the student learned at Harvard) — but the act of amazing natural connection memorialized in the poem required no sudden poesis or making; it was there to be had all along. One needed only to go as far from the world as one was disaffected by (or had been pushed to the edges of) the world. And there, having departed from such social conventions of meaning-making, one discovers and joins with someone who also needed to seek such a risky safe space.

The recording of this episode was made on the same day that Carlos Decena read from and discussed his book Circuits of the Sacred: A Faggotology in the Black Latinx Caribbean. Our episode indeed concludes with Carlos’s reading of a passage from the book. The recording of the program can be found here.

Zach Carduner was the director, engineer, and editor of this episode. The photo used here is by Walter Silver and is part of the photography collection at the New York Public Library. We are grateful to Mandana Chaffa for her help in securing the copy and securing permission for us.