Tracie Morris, 'Slave Sho to Video aka Black but Beautiful'

Camara Brown, Edwin Torres, and Brooke O’Harra joined PoemTalk producer-host Al Filreis for a discussion of Tracie Morris’s “Slave Sho to Video aka Black but Beautiful.” The recording used as the basis of this conversation was made at the 2002 Whitney Museum Biennial Exhibit and is available on Morris’s PennSound page. The performance piece/musical poem was first performed at NYU in the 1990s, in a graduate performance theory course, a last-minute improvisation after Morris discovered she misplaced or lost her planned text, accompanied by — and intuitively responsive to — two colleagues whose dance movements, in part, reproduced the sweeping up-down motions of rice harvesting. 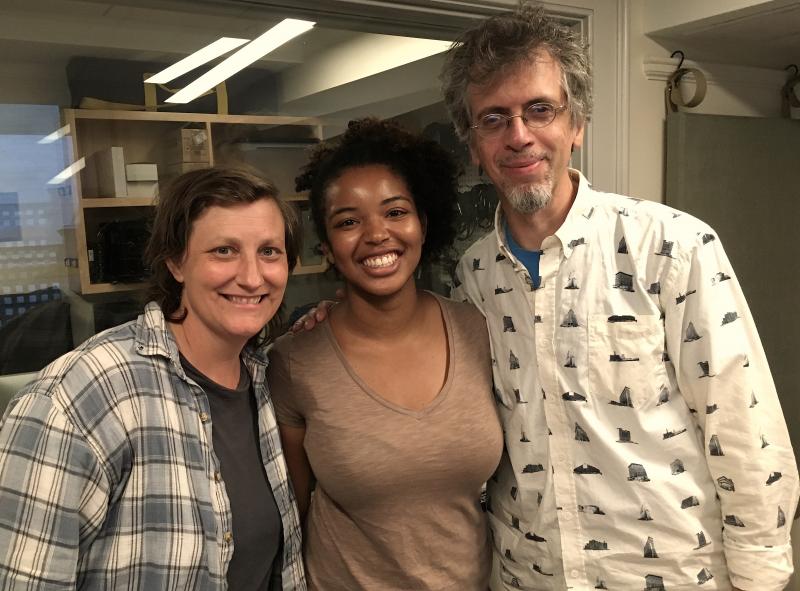 The three guest PoemTalkers being performers themselves, the conversation naturally turned to the crucial connection between voice as expressive subjectivity and voice as physical sonant effect. At one point, Al invites Brooke, Camara, and Edwin to describe the impact on their own work of Morris’s radicalization of the poetic voice as an agonizing through stereotype. Brooke emphasizes the theatrical power of verbal slippage, and all three describe the repetitively performed (Steinian) homophonic phrases as creating positive ambiguity. Al notes that Morris, here and in other pieces, engages the “antithetical sense of primal words” (Freud). “Ain’t” can also mean “is,” thus questions are also remarks, etc. Morris has the capacity to turn negatives into positives without leaving behind the aurality of the negative. And in this part of the discussion Al refers — though not as explicitly as he would like — to two other pieces: “Africa(n),” with “It all started when we were brought here as slaves from Africa” as its baseline, a stentorian “Afro-Shakespearian” sentence bespoken before it is taken vocally to pieces; and “Chain Gang,” which uses Sam Cooke’s “That’s the sound of the men working on the chain gang” as its basis for variations emphasizing the broken work entailed. In “Slave Sho,” as the group discusses, the starting point is interestingly less clear than in other pieces. The group works this out. It seems to be “Ain't she beautiful?” with the historic progressive mantra “Black is Beautiful!” emerging sonically from “... but she’s too black.” Tracie Morris engages the stereotype — quotes it, repeats it — and then disengages from it, but only with great care taken so as not to dismember the sounds’ capacity for asserting the body’s beauty just as it is. The latter is a point Camara makes with particular cogency.

Episode #108 of the PoemTalk series was directed and engineered by Zach Carduner, and edited by the same Zach Carduner. You can subscribe to the PoemTalk podcast on iTunes. Join us for the next episode, in which Joseph Massey, Emily Harnett, and Siobhan Phillips discuss Kate Colby’s long poem I Mean. (Above at right, from left to right: Brooke O’Harra, Camara Brown, Edwin Torres. Photograph by Al Filreis.)