PoemTalk is back after a bit of a holiday hiatus. Happy to be back with episode 13 on Kathleen Fraser’s disorienting prose-poem “The Cars.” The piece appears in two paragraphs on a single page in Fraser’s great book Discrete Categories Forced into Coupling. At some point during our discussion we ask ourselves if there are any such mergings going on in “The Cars” and we agree that there are, certainly. For one thing, two categories so literarily basic as subject and object: the poet’s subject position (the p.o.v. of the passenger in a car on an interstate highway) and the object of her gaze — a “dusky”-necked body, a dark or light-darkened man, dangerously crossing the highway at dawn, barely visible to the swiftly passing cars, looking for something he’s lost. The person in the car, the narrative seer, sees him, but then she’s past him. Did he make it? Did others see him? Does one want to see or to help, and are these categories discrete? 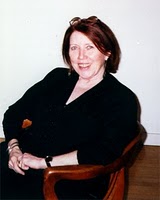 The PoemTalkers this time were Kristen Gallagher, CAConrad (both on our program for the first time) and a wonderful regular, Jessica Lowenthal. Conrad identifies strongly with the woman in the car and expresses real doubts about the man crossing the road. Kristen is, in the end, concerned about the gendered poetic ethics of observing danger for the sake of the poem, which, to be sure, is a problem she feels Fraser raises in the writing (and thus it is a poem about this very “journalistic” problem). Jessica, aided by informal commentary from Kathleen Fraser herself (delivered by surprise, somewhat unfairly, by Al), comes to believe that at the center of the poem’s concerns is the disoriented body. Al agrees: it is a body in space, dislocated by interstate highwayness, with no place to stand, no light to define, no there to be there.

PoemTalk #13’s engineer and director was James LaMarre and our editor as always is Steve McLaughlin. We at PoemTalk wish to express thanks to Kathleen Fraser (pictured above) for her generosity and assistance.

Sprinting across the freeway just ahead of them having set his left foot down directly onto the pavement from the ledge of the cement divide and edging his other leg forward deliberately—caught the way sports pages show an athlete with muscles condensed in the effort of crossing through a particular space—and then she sees the cars coming towards him giving off that early morning shine across their hoods almost colorless but precipitous in the four-lane parallel rush of metal and cannot tell if any driver straining into the distance further ahead has seen him or possibly has caught that glint off the long black flashlight he appears to carry with its up-beam turned on full and faintly visible due to the angle of early sun falling over the mid-western plains fanning out in every direction away from the sudden view of the airport hub’s acclaimed architectural design.

She sees the brief alignment of his body methodically finding its way across the freeway lanes blue baseball cap fit snugly over his head to just above the hairline here now dusky skin of his neck breaks into the picture. He’s made it halfway, she thinks but she can’t stop the cars rushing towards him even as he scans with concentration the worn lanes for the thing he’s lost as if he’s walking through the dark and shining his flashlight wherever the object might have landed, his right knee still lifting purposefully upward and forward.