Tyrone noticed a similarity to the “talk poems” of David Antin (although acknowledging their different ideas about improvisation): for each it is important to understand how entering a room, unprepared, leads to work that comes from reacting to the space and part 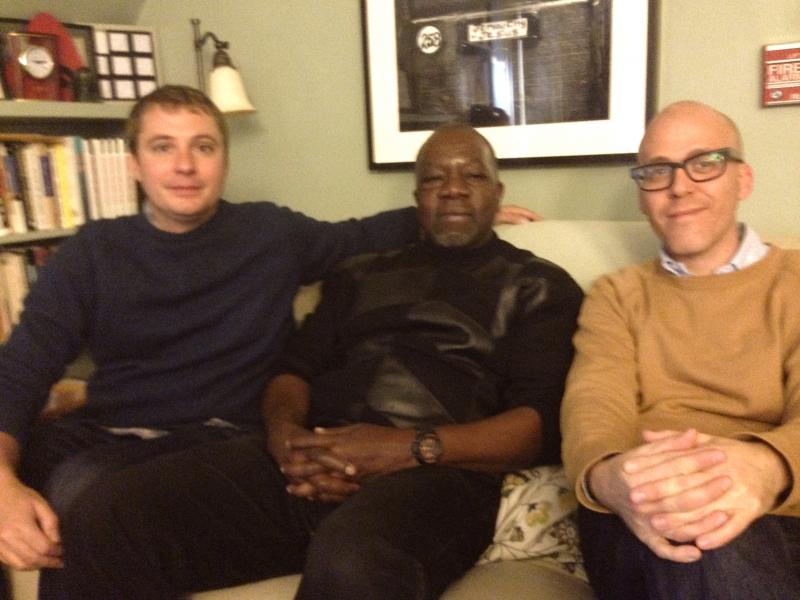 icular environment.  The relation between a text and the space in which it is performed is always a significant matter, but never more so than in this unpredictable mode.  Pondering Benson’s idea that some of the material he utters is only intermittently “accessible to [his] attention,” Thom observes that what distinguishes Benson from other Language writers is the way he’s developed an improvisational practice in order to make himself “radically vulnerable.”  He knows the transitions in advance but doesn’t know what will fill in the spaces (the “body” of a work — the typical carrier of content) between the transitions, which are in this case the only semi-stable aspect.  This work unfolds as a way of “mediating or providing structure” to the fact of “becoming naked before his own interlocution,” in Thom’s phrase.  Patrick notes that a way of enjoying this work it is to deem it composition. “What you witness,” Patrick notes, “is not a performance but a composition. [An audience] is there as a piece of art is being composed.”

Three nights after the Bowery Poetry Club performance we used as the basis of our discussion — by then Benson has traveled to the Writers House in Philadelphia — he again improvised a long poem composed of questions, although on this occasion he then responded at length to inquiries about the method from the audience. His transcript of this performance also appears in Open Clothes — as “If you stop to listen to yourself think” and “Is your thinking about the words.” A full audio recording of the event, including the Q&A session, can be heard here.  Again, Steve McLaughlin created excerpts:

In May 2011, Eric Baus wrote about Benson's improvised questions for his Jacket2 commentary, “Notes on PennSound.” In 2006, for Jacket issue 31, Rob Stanton reviewed Open Clothes and made reference to the transcription of the 2003 Writers House Q&A.

PoemTalk is produced by Al Filreis, was engineered this time by Steve McLaughlin, and edited, as always, by Steve McLaughlin. The series is sponsored by PennSound, the Kelly Writers House, and the Poetry Foundation. Program notes are hosted among the podcast series, of course, at Jacket2.