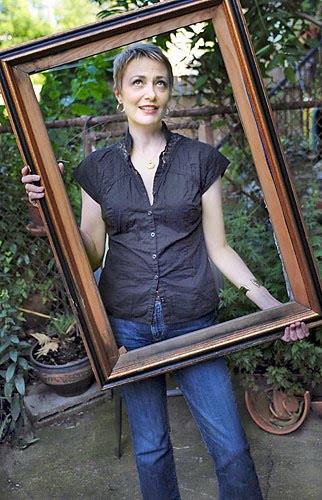 The recording we used was made at the Writers House in February of 2007, at a mini Flarf Poetry Festival organized by our own Steve McLaughlin. We’re pretty sure that the poem was first posted to the flarflist – a listserv of flarf practitioners (and a few nonpracticing advocates) that serves as a medium for trying out all sorts of improvisational and quasi-improvisational poetic “bottom-feeding” (to use Kenny G.’s positive phrase). Is flarf poetic, non-poetic or anti-poetic, or, anyway, what combination is it of those three? That turns out to be the crux of our discussion. What “poetic” elements and devices does Mesmer retain and employ, and to what effect? Gary Sullivan originally defined flarf writing as, among other things, “corrosive,” and when Al asks the group whether Mesmer’s poem is corrosive, a fascinating discussion ensues: in part, we seem to move away from Sullivan’s notion. And since this is a poem, at least at first (at least superficially [superficially?!]) about Harry Whittington, the man Dick Cheney shot during a boondoggling hunting trip in Texas, it seems reasonable to ask about the political meaning or import of the piece.

The answer is hardly straightforward. At one point Steve pulls out the smoking gun (as it were), proving that Sharon Mesmer took most of the poem verbatim from Internet sources. And what about taste? Al puts it straight to Kenny, who has sometimes argued that one conceptual work is effective, while another work is not--the key being, the quality of choice of of concept. So what, Al asks, is the role of aesthetic distinction and valuation? Nada adds some possibly quite relevant biographical information, so we are led to ponder: What does Mesmer’s family of blood-on-apron butchers and her own principled vegetarianism have to do with the politics of the poem – its critique of a culture in which everything, actually and figuratively, tastes like chicken? It is, of course, a culture that includes this poem and makes it entirely (and specifically) possible.Here is Sharon Mesmer's PennSound author page, and here is a direct link to a recording of the poem. Here is a link to one of Mesmer's internet sources.

Our engineer and director for this program was James LaMarre.