For the eighty-seventh episode of PoemTalk, Michelle Taransky, Cecilia Corrigan, and Lily Applebaum joined Al Filreis in the Wexler Studio of the Kelly Writers House to talk about two poems by Emily Dickinson, “She rose to His Requirement” and “Wild Nights — Wild Nights!” Texts of the poems can be read here and below. A recording of Susan Leites performing “She rose ...” is available at PennSound’s Emily Dickinson Birthday Celebration page, as is Jan Heller Levi’s performance of “Wild Nights!” 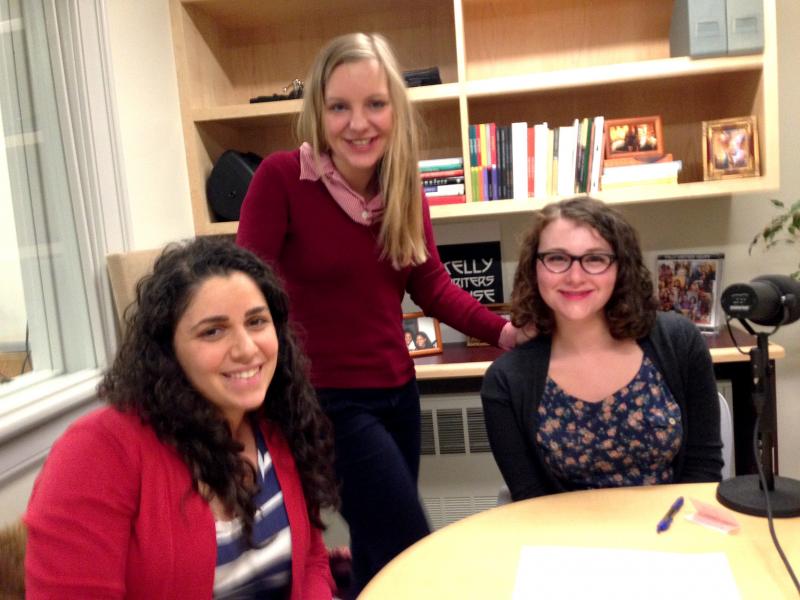 The discussion ranged across many related topics, among them the intentional re-engineering of the gendered pronoun; the excitement of wanting Dickinson’s poems to be complicated; the tossing out of the tools that get you to safe harbor and the conception of writing as being at sea; linguistic constraint as sexiness; the power of unidiomatic language; marriage as disabling awe; the unsaying or un-mentioning of hidden amplitude; the poem as itself work; metrical irregularity as a form of “busting” social requirement; resistance to poetic distribution as triumph and not gender tragedy; and mooring as a form of sexuality. (Above, left to right: Michelle Taransky, Cecilia Corrigan, Lily Applebaum.)

We hope that PoemTalk listeners who enjoy this new discussion will go back to episode #32 to hear Jennifer Scappettone, Marcella Durand, and Jessica Lowenthal talk about Susan Howe’s reading of “My Life had stood — a Loaded Gun.”

This episode of PoemTalk was directed and engineered by Zach Carduner, who coordinates the Wexler Studio, and was edited by Amaris Cuchanski.

She rose to His Requirement — dropt
The Playthings of Her Life
To take the honorable Work
Of Woman, and of Wife —

If ought She missed in Her new Day,
Of Amplitude, or Awe —
Or first Prospective — Or the Gold
In using, wear away,

It lay unmentioned — as the Sea
Develop Pearl, and Weed,
But only to Himself — be known
The Fathoms they abide —