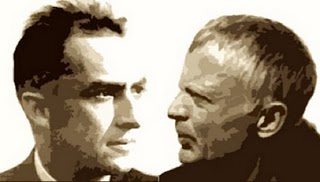 The Williams PennSound page features every known recording made of the poet reading and talking. Scroll to the bottom of the page and see, gathered together, links to all the readings of several of the WCW chestnuts: “This Is Just to Say,” “Between Walls” (the topic of the very first PoemTalk show), “To Elsie,” and PoemTalk 30’s twosome.

The recordings of William Carlos Williams on PennSound were compiled at Keele University, England, by Dr. Richard Swigg, based on work originally done in 1992 and 1993. PennSound gratefully acknowledges the scholarship and editing of Dr. Swigg in making this Williams sound archive available, and also the estates of the sons of William Carlos Williams, and Peggy Fox at New Directions, for giving PennSound permission to make the recorded poetry of Williams downloadable and free to all. The PennSound Williams page is one of the most oft-visited web pages devoted to poetry anywhere in the world.

Our engineer for this episode of PoemTalk was James LaMarre and our editor is Steve McLaughlin. We’re on a Grenierian roll and next time on PoemTalk, episode 31, you’ll be invited to hear Jena Osman, Joseph Yearous-Algozin and Bob Perelman talk with Al about the famous Sentences project, five hundred poem-cards stacked in undetermined order inside a home-made box.