Bob Cobbing (1920–2002) — sound poet, visual and concrete poet, DIY printer, and active member of an alternative socio-poetic community in the UK — insisted that there’s no use in adding to poetry what’s already there. In “Some Statements on Sound Poetry” (1969) he wrote: “Gone is the word as the word, though the word may still be used as sound or shape.” And he added: “Poetry now resides in other elements.” In this episode, Al Filreis is joined by sound poet Jaap Blonk, phonotextualist Steve McLaughlin, and experimental archivist Danny Snelson as they approach a single work by Cobbing, “Portrait of Robin Crozier,” in an effort to identify generally those “other elements.” The version of “Portrait of Robin Crozier” we use here is from the album Green Computer of 1988 and can be found on PennSound’s Cobbing page under “Recordings 1968–2005.”

Robin Crozier was a Fluxus-affiliated mail artist who sent out commissions to 100 artists, asking each to make a portrait of him — although most of those commissioned had not met Crozier in person. So far as we can tell, Cobbing was among those who didn’t “know” C

rozier in that conventional sense. Cobbing used a spirit duplicator, probably his famous old Gestetner machine, inky and smelly, to produce an image (see below) that to Danny Snelson seems at first abstract, then figurative (it is possible to see it as a human shape), then abstract again. Steve McLaughlin sees in the portrait — both the visual Gestetner smear and the sound poem derived from the visual blot as a kind of score — an expression of the special way in which Cobbing shared Crozier’s aesthetic and political (anarchistic) sensibility: thus the laughter in the sound poem expresses delight in a friendship as it enacts in itself the pleasure — what Steve calls “a pre-hierarchical glee.” The poem attempts to do in sound what its author believes Crozier does in his work; its meaning as portraiture derives from doing rather than being, composition as playful work rather than essence as a given. Jaap notes that one hears affection in the piece, and can understand it — like any traditional poem of love or admiration — as a “direct utterance” toward a friend.

PoemTalk #72 was engineered by Zach Carduner, produced by Al Filreis, and edited by Steve McLaughlin. On the day Jaap Blonk joined us for PoemTalk, he also performed at the Kelly Writers House; that performance is available in audio and video recordings on the Writers House web calendar and at Blonk’s PennSound page. 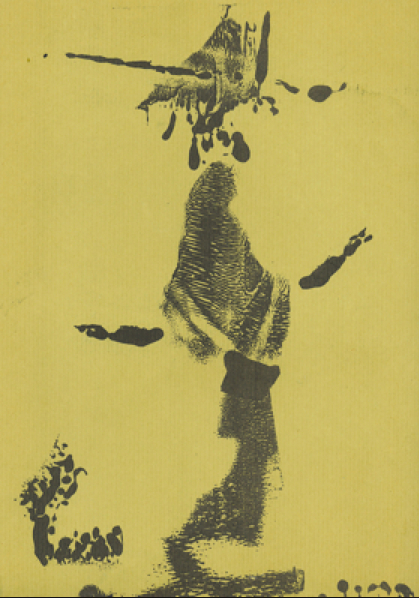