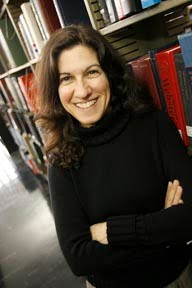 For an event held at the Writers House on November 7, 2001, Jena Osman composed a new poem — one might say thus that it’s an occasional poem. The occasion was given the overall title “Finding the Words” (as in: how can writers find words to bespeak a response to 9/11?) and Osman’s poem was “Dropping Leaflets.”

Here is verbatim what Osman said as she introduced the poem at the Writers House: “The title of this program is ‘Finding the Words.’ Every day I look in the newspapers. I keep sensing the presence of what's not being told... ‘Help me come up with a strategy to get through this white noise.’ I don't have that strategy, except to call attention to components of that white noise so we can hear it for what it is. In the spirit of Marianne Moore, who often incorporated what she was reading into her poems, I’m going to read a piece made of words I found when I read transcripts of press conferences given by Bush, Ridge, Rumsfeld, and Cheney in the last few days. I read the transcripts, printed them out, I tore them up, and then I stood on a chair, and then I bombed my office floor with them as if they were leaflets and the leaflets told me what to do. So this piece is called ‘Dropping Leaflets.’”

The text of the poem is given here. It was published subsequently in a book, An Essay in Asterisks (Roof Books, 2004). The recording made on November 7, 2001, is available on Osman’s PennSound author page and linked here.

Al Filreis convened Mark Nowak, Emily Abendroth and Jessica Lowenthal to talk about this poem and more generally some aspects of documentary poetics. They considered, among other things, what happens to such a historically specific writing when some of the context fades as a memory — and whether the aesthetic qualities of the poem become a primary impression. And yet the poem’s rhetoric — if that's the right term for a poem constructed of found phrases — speaks to the very question of how we can make ourselves heard in all the centralizing, nationalistic white noise at such a moment.

This episode of PoemTalk was directed and engineered by James LaMarre and edited by Steve McLaughlin.