This corner of the Diaspora (PoemTalk #121)

One glorious Sunday afternoon at Kelly Writers House — after a concert featuring performances by Jake Marmer accompanied by Klezmer trumpeter/bandleader/composer Frank London; Julia Patton in collaboration with Paul Van Curen; and Bob Holman in percussive dialogue with Papa Susso (recordings available) — Jake, Frank, Al Filreis, and Maria Damon ducked into the Wexler Studio to talk about Jerome Rothenberg’s Poland/1931. The group chose to focus on the section of that 1974 book entitled “Galician Nights, or a Novel in Progress” — and, even more specifically, on a 2002 performance of that piece with Rothenberg chanting the text while backed by the Klezmatics (the band including, of course, one of our interlocutors, the Hasidic New Wave eminence Frank London, on trumpet). The recording — which lasts six minutes and twenty-six seconds — can be found at Rothenberg’s extensive PennSound page. We urge PoemTalk’s listeners to listen to that whole recording, but for this episode of PoemTalk the group considered the first two minutes and fourteen seconds. The text of “Galician Nights” can be found in the original New Directions  Poland/1931 paperback; in Rothenberg’s New Selected Poems, 1970-1985; and also in Triptych of 2007. Scroll down to the bottom of this program note for scans of the relevant Poland/1931 pages. 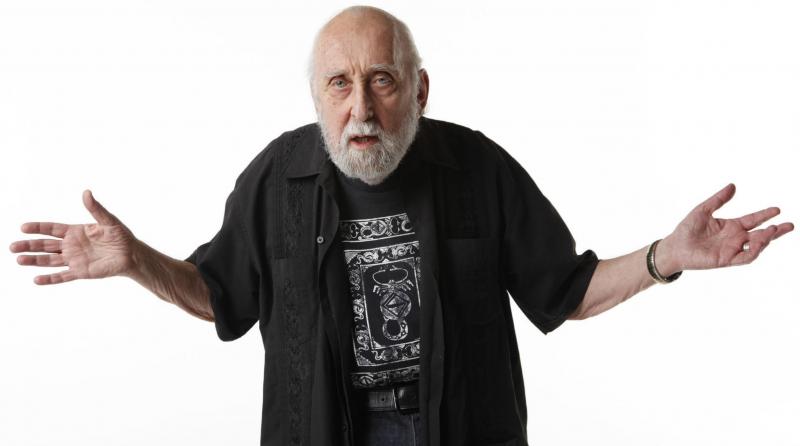 Frank London takes us carefully through the choices made by the Klezmatics backing Rothenberg’s chant, and by Rothenberg as he responds to their responses. Al then asks Frank why the Klezmatics modulated to a more abstract or “experimental” (less traditional?) style as Rothenberg began reciting the contents of a letter sent by a Jewish woman in China back to Galicia. Frank replies, “We thought that in section 4, by us getting ‘out of rhythm,’ we would allow Jerome to read it as a letter, if he wanted to” — in other words, to create the sonic distinction between this prose and the lineated poetic music of the previous sections. The Klezmatics thus, post facto (and somewhat improvisationally), meant to highlight the already performed first two sections, in which they sought to elicit from their instruments expressive melodies as analogues of the euphoric human voice — felicitious sounds of laughing and weeping. The Klezmatics’ paraliturgical instrumentalism induced Rothenberg, years after he wrote these verses, to explore their ecstatic capacity. Jake marks phrases where we precisely discern vocal ecstasy, such as in “little goy” (bottom of page 17 in the original New Directions edition). The tonal rapture creaks the words in such a way as to signify irony-defeating affection rather than distance and disparagement. Maria identifies other moments of such ecstasy: the gold, the honey, the rose gown, the sweet fervor rather than arrogance of archaic biblical diction. This, she says, contrasts fabulously with the “seedy weirdness” of the story being told.

PoemTalk episode #121 was recorded and engineered by Zach Carduner, and later edited by the same Zach Carduner. We are grateful to Jake Marmer for organizing the concert that preceded, and thus made possible, the PoemTalk session afterward. We are also grateful to Nathan and Elizabeth Leight, whose ongoing grant supports this series.

For larger views of the text, click on the scans below: 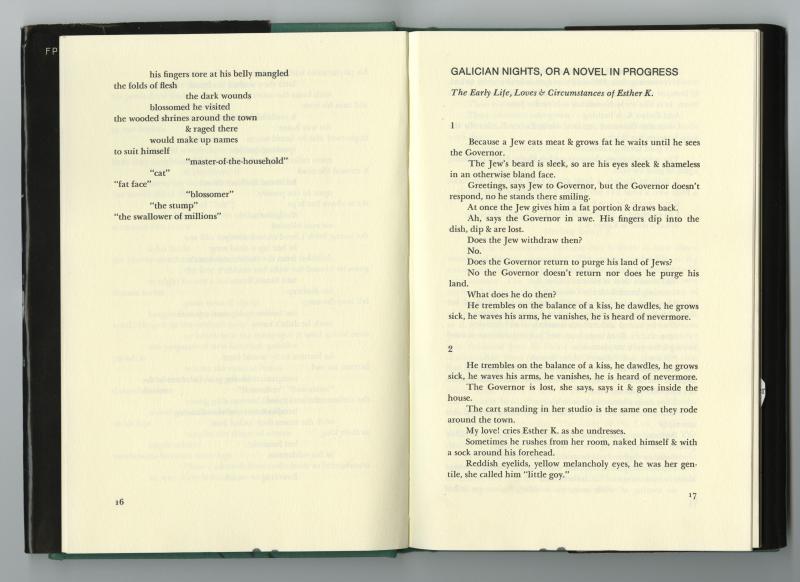 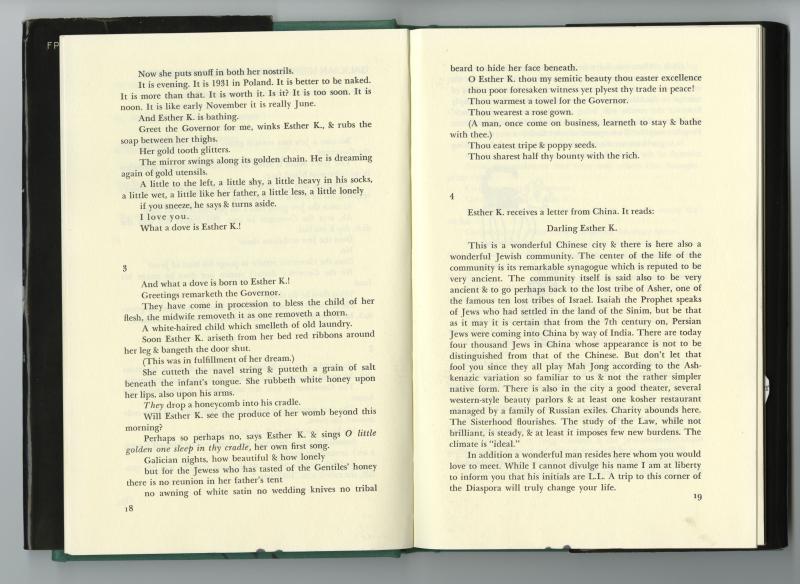 February 9, 2018
Related Content:
Ariel Resnikoff, with Jerome Rothenberg: From an interview (continued), on Jews & experimental modernism, with notes toward a poetry of witness & an omnipoetics
Aaron McCollough: A preface to Jerome Rothenberg’s 'A Cruel Nirvana'
Ernesto Livon-Grosman on Jerome Rothenberg's anthologies
TAGS: