Robin Blaser, 'A Bird in the House'

Brian Teare, Jed Rasula and Kristen Prevallet joined Al Filreis to talk about Robin Blaser’s “A Bird in the House.” The poem appears on page 359 of The Holy Forest: Collected Poems of Robin Blaser and dates from the late 1980s or possibly the early 1990s. The text of the poem is now available at the Poetry Foundation. Blaser’s PennSound page includes two performances — one from a reading (introduced by Robert Creeley) which Blaser gave in Buffalo in September of 1993, the second from a visit to the Writers Institute in Albany on October 26, 1994. The latter recording was made by Chris Funkhouser from the audience, and has been recently acquired by PennSound (thanks to Chris). The version we hear for our discussion is the one made in Albany; we chose this in part because there Blaser set up the poem with a short (and disarmingly straightforward) introduction. 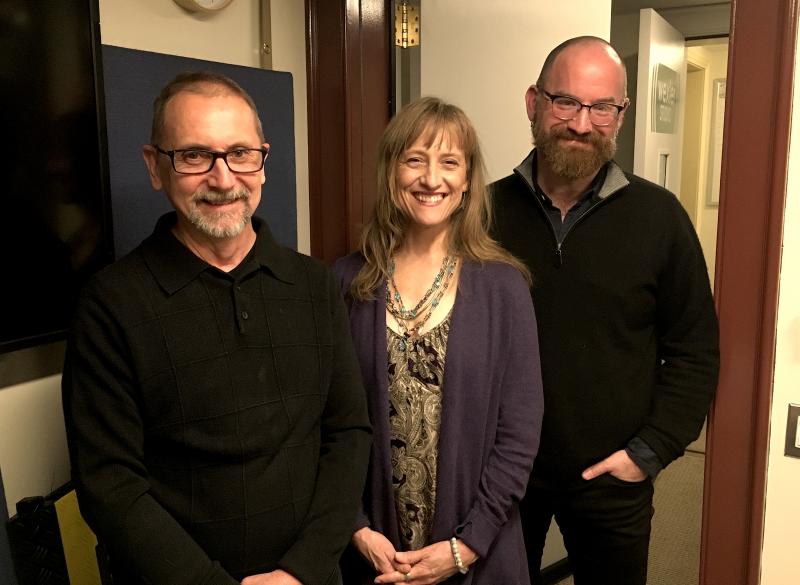 Kristin ponders how Blaser deftly manages to take the idea of Other (that which is, like the bird in a house, “otherous”) into an expanded field. And, as Jed notes, that widening field is domestic. Jed considers the move into that space to be beautiful, charming, and disarming. Despite the introductory remark by Blaser, in which he explains the bird entering a house as typically a premonition of death, the poem itself casually opens itself up “like a bird’s wings” (says Jed); it quietly enlarges “into another dimension.” So if it is not death, or truth — and if the poem avoids the easy symbology of mortal premonition — then what, after, is it? (“Kafka said troublingly, // it has many faces /it’s / the faces one wants” [emphasis added]). The group spends some time considering this open “it” and at a certain point turns to a comparison with a very different kind of nature poet: there is Robert Frost’s typical strategy in poems where the natural intrudes upon the human (where “it” is almost always a discoverable truth, ready for poetic vision). In Blaser, truth is not an object to be found or found out. That which beckons one to be true moves and refuses referent. “[T]he truth flies.” Brian observes how Blaser favors “the chance encounter” over any systematic reading of a scene, preferring the way a “pattern of chance” occurrences can produce a “continuing contravention” of the limits of what we can understand.

The bird, during its first of two annual visits, perches on the frame of a canvas by Tom Field, described once as the “reigning king” of painting in poetic San Francisco, and about whom Jack Spicer enthusiastically “laid down the law” (namely, “that Tom was the best painter in North Beach”). “Field was brilliant,” recalls Bill Brodecky, as quoted in Poets Be Like God: Jack Spicer and the San Francisco Renaissance (by Lewis Ellingham and Kevin Killian) — “an inspired painter.” When interviewed, Brodecky said he remembered Field himself talking about the painting called Genji, the very work Blaser bought and hung in his house in Vancouver. Whether the bird’s discriminate (indiscriminate?) nervous perch on Field’s Genji, wherein adultery is “found / out,” is meant as some kind of sly comment on Spicer’s characteristic insistence, and attempts at asserting terms of loyalty and expressing aesthetic dominance, is not clear; perhaps, anyway, such a question made humorously moot by the bird’s unpretentious choice of lasagna dish the next year.

PoemTalk #113 was engineered and recorded by Zach Carduner, and edited, as well, by the same talented Zach Carduner. Fans of this ongoing podcast series can find all episodes at iTunes, and can subscribe so as to be notified when new episodes are released. We encourage listeners to leave a comment or review.