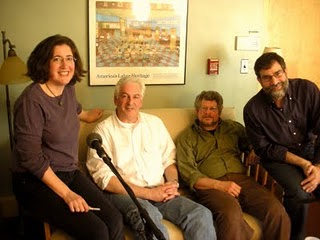 Our recording of the poem was made during a moving outdoor reading in September 2003 at the Kelly Writers House. It and all PoemTalk poems are available through PennSound.

We note that the phrase “World on Fire” is also taken from a popular song — of 1941. Here’s more.

As always, at the end, we gather some paradise. Marcella’s suggestion, which was omitted from the final edit, was one we are happy to pass along nonetheless: Tisa Bryant’s new book.

We at PoemTalk are grateful as ever to James LaMarre for his expert engineering and directing, and to Steve McLaughlin, our masterful sound editor.