Joan Retallack, 'Not a Cage'

One day Joan Retallack decided it was time to discard some books and journals from her personal library. Among them were Martin Buber’s I and Thou; a collection of short stories by David Kranes (Utah Press, 1979) called Hunters in the Snow; a 1974 volume of poems by Richard Howard; a published interview with Rita Dove; 1981 issues of The Socialist Review and Georgia Review; an issue of the Chicago Review that included an important line of Dante; books of poetry by Maxine Kumin, Ai, Burt Hatlen and Thomas McGrath; a 1988 number of Gargoyle magazine in which was published a poem by Angel Gonzalez beginning “The most obscure things have already been said”; Nuns and Soldiers by Iris Murdoch; Explanation and Understanding by Georg Henrik von Wright (Cornell, 1971); and others. This act of elimination, which on the contrary turned out to be a recycling and an archiving, produced a poem she came to call “Not a Cage,” after John Cage.

Here is what the poet wrote to a colleague about this work:

All the language in it is from books I was culling from the library. I made lists of sentences and phrases from beginnings and endings of books. I was culling a lot, so there were many more beginnings and endings on [my] yellow pad than ultimately went into the poem. I didn't change any words or orders of words within the units I drew from the books, but did decide the length of each. The poem was composed with a combination of chance and intuitive composition on my part. “Not a cage” was a phrase that happened to be at one of the critical sites in one of the books.

Retallack deemed the compositional process to be Cagean, surely, from the start, and yet she found “Not a cage” (in a poem by Richard Howard) using the procedure.  All the talkers this time — Danny Snelson, Jena Osman, and Jonathan Monroe — took this to be remarkable and instructive and (differently) pleasurable. Al Filreis and 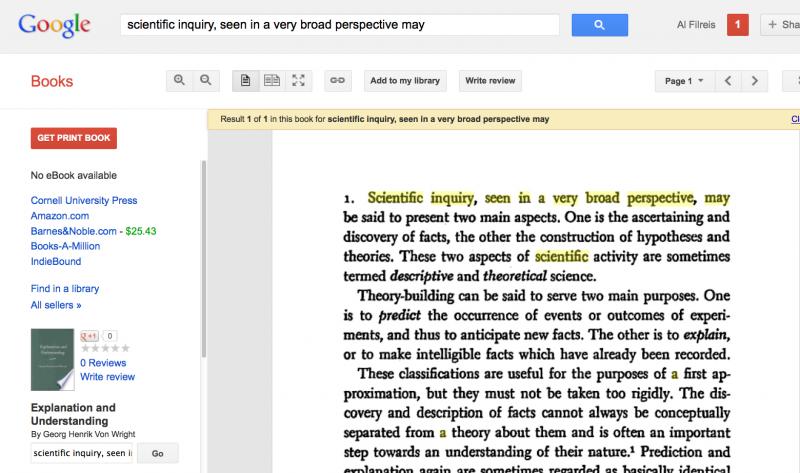 Danny derived special pleasure from the Google Books-enabled sleuthing that produced a nearly complete bibliography of the disappeared books and deemed such work to be just a further step along the path the poet had already traveled, she whose impulse was to do something archival to “assuage” the “guilt” she felt at the selection. Danny describes a desire to know. Jena observes that the questions have changed, largely because of emergent storage and search technologies, between 1990, the time of the poem, and now. "When she made this piece, it was a question of ‘What will happen if I do this? What coincidences will occur? What sense will be made that I cannot predict?’ And now, you come across something like this, and the question is ‘Where is it from?’” To which Danny replies: “Now there are so many more interesting things, such as [being able to discern] all the discrete little decisions that she makes. You can go back and see, for instance, that she quotes this whole line but breaks it in half.”

So Jena disagreed with Al’s inclination to do what amounts to a biographical (or bio-bibliographical) reading of the poem based on assumptions Al felt could be naturally made about what books the poets wanted to discard — and the desire to make something bona fide Cagean out of a mostly non-Cagean canon. What we make disappear bespeaks what we wish to be all the more present. And Jena disagreed with Danny’s approach, a close cousin to Al’s, which celebrates new capacities enabled by the digital super-archive that warrant a close dissection of procedure-directed choices of non-authorial texts.

Meantime, Jonathan set up an overlapping and yet distinct and challenging binarism — that of the “seminar” approach as distinct from the “workshop” approach to such a poem. He begins his point by pondering — and somewhat doubting the efficacy of — the act of close reading the poem’s enjambments. “Is that maybe more of a workshop question, in relation to reading this poem, than a seminar question? And my question would be more of a seminar question, a hermeneutic question of trying to construct some kind of gestalt of the poem as a wh

ole, and an understanding of the poem as a whole.... I find myself especially recently wanting to encourage [in my students] a kind of distant reading, in a way, to back up from the poem. So I wonder, given the interest of the enjambment here: where do you go from there to an interpretation of the poem as a whole?” In her response, which PoemTalk listeners are encouraged to hear for themselves in the audio recording of our discussion, Jena urged us to consider the works of John Cage, noting that it would be hard to imagine “that paying attention to things that you might not pay attention to otherwise is not key. Cage is about close reading or close listening — or listening differently.” (Pictured above, left to right: Danny Snelson, Jena Osman, Jonathan Monroe.)

Here is the text of “Not a Cage.” PennSound’s Joan Retallack page includes two recordings of her performing the poem: one from a reading given at Buffalo in 1993, another recorded by Aldon Nielsen in 1991.

PoemTalk is produced by Al Filreis and is sponsored at the Kelly Writers House (special thanks to Michelle Taransky and Jessica Lowenthal), by PennSound (thanks to Charles Bernstein), the Center for Programs in Contemporary Writing (thanks to Mingo Reynolds and Chris Martin), and the Poetry Foundation (with thanks to Cathy Halley). Our show this time was engineered by Jeff Boruszak and edited, as always, by Steve McLaughlin.