Hold your breath and gag (PoemTalk #6)

Jaap Blonk, 'What the President Will Say and Do' 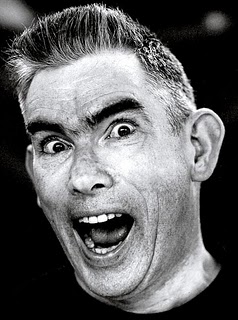 It’s easy to imagine that when Tracie Morris (the performer and musical poet) and Kenny Goldsmith (father of Ubuweb, proponent of uncreative writing) joined me and Joshua Schuster as PoemTalkers there would be some noise, pure noise, and indeed there was. So why not go all the way and make our poem a sound poem: Jaap Blonk’s insistently sounded performance of the phrase that is the title of a book by Madeline Gins. What the president will say and do. What, indeed?

Joshua and Kenny and I had seen and heard Blonk perform the piece in the very room where we recorded this episode of PoemTalk; Tracie and Kenny had heard him do it for the first time, at a conference in L.A. where Gins was in the audience. So we had this one covered from all sides.

“So,” I asked, “what do you think is the deficiency of having only an audio recording of this?” I was thinking of Blonk’s strained reddening face and neck toward the end of the piece: a giant of a man holding his breath and choking on words. Kenny’s response to this question: “I don't think there's any deficiency, because he's such a good performer that the audio component of the performance carries the day. And if you’re lucky enough to see him it’s even more incredible in a different way, but I don’t think anything is lost without him being there.” Tracie agrees: “You listen. You just listen. There are so many great things he’s doing with that piece.”

So do, please, listen. Listen to us, yes, but listen especially to Blonk.

Tracie hears patriotic marching in the percussive deformation of the sound of the words (and specifically hears Sousa). Josh hear resonances with presidential politics (to which Tracie adds that she also hears chickens). That leads Josh and me to take some advantage of an apparent split in the soundy camp between the overtly political music poet (Tracie) and the pleasure-seeking all-words-are-already-political gatherer of verbal ambience (Kenny). The political/aesthetic binarism collapses rather quickly, but it’s fun (and edifying) while it lasts.

Our recording of Jaap Blonk was made on November 11, 2004 at the Kelly Writers House, recorded by Chris Mustazza and now part of the PennSound archive. Kenny’s UbuWeb has a wonderful Blonk page, replete with a bibliography.

As always, Steve McLaughlin was our director and our editor.