On the chance that PoemTalk’s listeners are ever tempted to stop listening after the main conversation and before we “gather Paradise” (make recommendations), we urge you to stay through to the end of this episode in particular — at which point you will hear Cathy Eisenhower’s short list of Washington, DC, venues for readings and gatherings. And we’ll add, here, belatedly, our intention to travel soon down to DC for an on-the-road PoemTalk.

Yes, so Cathy Eisenhower joined us from DC, and Christopher Schmidt from New York, and Katie Price from just down the campus Walk – to talk about one of the prose poems in Jennifer Moxley’s 2007 book The Line. Moxley had previously authored Imagination Verses (Salt, 2003), The Sense Record and other poems (Salt, 2003), and Often Capital (Flood Editions, 2005) among other works. We took up The Line because it would seem to enable us to talk about the situation or state of the poetic line — the poetic unit of language, the aesthetic or politico-aesthetic lineage – and we chose “The Atrophy of Private Life” within that book because the meta-poetic sense of “the line” would have to be at best implicit and we wanted to push ourselves to consider a possible critique of the sorry or depressed state of contemporary private life as itself a kind of line (as in ideological line) in such a way that the three senses of “line” — (1) poetic unit, (2) aesthetic lineage, where a poet fits or doesn’t fit, and (3) political stance — might converge unevenly and uneasily yet revealingly.

Private life is becoming emaciated and “the sets of relations are very limited” (notes Cathy), and so aptly we are in “a house strewn with fashion magazines.” The piece contends, seemingly straight out, that the destruction of the poetical has been mostly caused by the fabulously rich. The poet  unmasks American bounty as actual impoverishment. Is Moxley really suggesting these things directly? Cathy says yes – and also no. “There’s a lot of switching going on — with ‘meaning’ and ‘money.’” If those two terms were “flipped,” adds Cathy, “I’m not sure it would matter that much.” [Below, from left to right: Cathy Eisenhower, Christopher Schmidt, Katie Price in PoemTalk’s garret studio.] 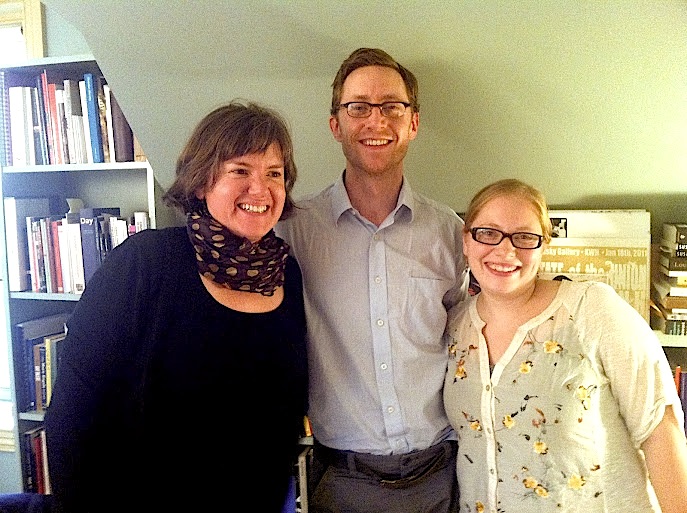 Chris is interested in the mask in the poem. In Marx, the commodity masks real relationships. So that is the leftist line (another “line”) Moxley nods at, and possibly contends, but she’s also troubled with the notion and trend of masking in poetry: the languaged or non-transparent selfhood of the writer apparently never discernible.  Doubt that much-accepted concept, Moxley explores didacticism as an alternative to and resistance to a certain dominant “fashion” in the world of poetry itself, not merely, in other words, in the world of the fabulously rich. In this way, say Chris and Katie both, the mask represents the poetics of surface at which Moxley clearly excels (through her own excellent training as a writer) but which she also regrets. (Is that regret the source of the “depression” we all sensed — as did reviewers — in The Line?) Katie adds that Moxley is suspicious of the image and the language becoming “almost too pleasurable.” A line can be pleasurable and through the pleasure derived from it seem to say one thing, and then (here’s the resistance) it can be seen as saying the opposite.

Our recording of Moxley’s performance of the poem comes from a November 2004 reading (prior to the publication of The Line) held in Brooklyn for “Radio Poetique.” And here is the text:

The Atrophy of Private LIfe

In the heavy fashion magazines strewn here and there around the house the photos of objects and people mouth the word “money,” but you, assuming no one wants you anymore, mishear the message as “meaning.” Arousal follows. The lives of the rich are so fabulous! The destruction of the poetical lies heavily on their hands, as on their swollen notion that we are always watching. There is nothing behind the mask. Nothing suffocating under its pressure, no human essence trying to get out.
Awareness, always awareness. Don’t you see how these elaborate masks are turning you into a zombie? The private life is not for the eye but for the endless interior. It is trying to push all this crap aside and find the missing line. Nobody, least of all the future, cares about the outcome of this quest.
It is easy to lose, through meddling or neglect, an entire aspect of existence. And sometimes, to cultivate a single new thought, you need not only silence but an entirely new life.

PoemTalk #55 was engineered by Chris Martin and edited, as always, by Steve McLaughlin.