Kathryn Hellerstein, Peter Cole, and Ariel Resnikoff joined Al Filreis to talk about Allen Grossman’s poem “My Radiant Eye.” It’s a late poem written in a late style. It appears in Grossman’s last book, Descartes’ Loneliness. The performance of the poem, recorded by Harvard’s Woodberry Poetry Room, gives us a voice that has “vatic sweep and boost,” as Peter puts it, but also “fragility.” Kathryn, who knew Grossman as her teacher of Humanities 1 at Brandeis decades earlier, will “never forget th[e] voice” of those long-ago lectures. That dramatic intoning is still here, she observes, but “you feel him slipping a little.” There is some improvising in the performance even as it falters. “I like the way he seems to be engaged with the text but not completely committed to it,” Ariel adds. “I love that you get this sense for the poem which is outside of the page, which exists momentarily in his mind but really only exists in this recording.” (We cannot think of a better reason for aural study of audio archives of poet’s readings.) 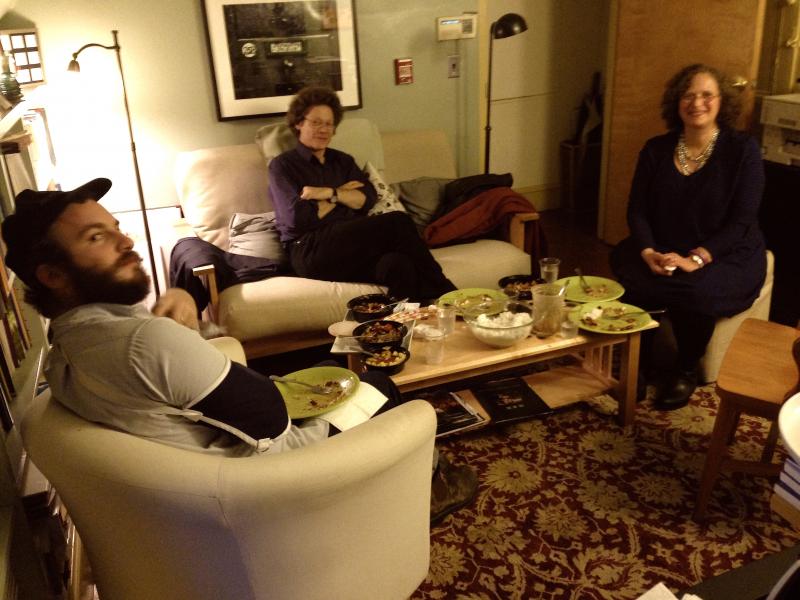 Our discussion led us to understand this poem as aligned well with Grossman’s overall belief late in his career that there is an ideal of a poem — that there is always an indefectible version that can never be realized in any given poem, an imagined poem that every poet is writing and which stands in a somewhat haunted, mournful relation to the poem that actually gets written.

Kathryn has found the Talmudic passage that seems to be the source, or one of the sources, of the comic didacticism in “My Radiant Eye” — all those detailed rules about what one can and cannot do in a “desolate synagogue.” The ancient source uses the term “ruined” rather that “desolate.” The latter word choice adds an emotional diction. “Ruined” seems external, an encountered given. “Desolate” conveys loneliness as an effect of ruination. The poem seems not to mourn the loss of the Jewish community, which is certainly one plausible reading. It is, rather, an individual pre-elegy. Grossman is mourning himself, in a way — marking the decline of the situation of the individual poet, safely inspired long before in “The Caedmon Room” (see a key poem of that title elsewhere in Descartes’ Loneliness). The productive poet’s space of original (and premodern, Peter notes) inspiration is now an abandoned weedy synagogue. The speaker tosses around regulations and injunctions for the use of “that Jewish study space” (in Ariel’s phrase) as if such rules make sense and could be followed. In fact we cannot imagine following them, so when the speaker claims to “know these things,” the reader is prepared for the absurd comedy of the conferring of the laurel crown by, of all random authorities, the King of Sicily. (When we arrive at Sicily, the poet himself seems a bit amused and surprised that we’ve gotten there.) The crowning is wholly ironic. In the end, the only way the vatic poet can achieve a transcendent experience is through “this baffoonish holy fool impersonation” (in Peter’s phrase). There is something pedantic and Talmudic — and unpoetic — about the repetition of the phrase “desolate synagogue.” But it is also, finally, poetic. Repetition is a form of refrain. As Kathryn observes, Grossman is “making an English poem out of pedantry and Talmudic study that seems to be at odds with the radiance of his eye.”

PoemTalk #96 was engineered and directed by Zach Carduner and Adelaide Powell, and edited by the same talented Zach Carduner. Al Filreis is the producer of the PoemTalk series, begun in 2007, and he looks forward to a special 100th episode. For that, seven poets who have appeared as PoemTalk guests over the years will converge on the Kelly Writers House to reflect on earlier episodes.