My first poet friend in New York was William Leo Coakley. He and his lover, the actor and writer Robin Prising, lived on the Upper West Side, and they introduced me to Helen Adam in the early 1980s. I spent several jolly Victorian Christmas dinners at Robin and Willie’s, with Helen and her sister, Pat, and others of the hosts’ friends.

Helen was born in Scotland in 1909. She was a child prodigy poet and later came to America with Pat, settling in San Francisco. There, along with Robert Duncan, Lawrence Ferlinghetti, Allen Ginsberg, and others, she was part of the San Francisco Renaissance. In the late 1950s, she wrote the ballad opera San Francisco’s Burning, about life before and during the earthquake and great fire of 1906. It was produced in the 1960s, first in San Francisco, with music by Warren Jepson, and in New York, with a new score by Al Carmines. Helen played a major character, the Worm Queen, the Queen of the World of the Dead, in these productions. In the mid–1960s, Helen and Pat moved to New York and lived together in a small apartment at 223 East 82nd Street.

One evening in the fall of 1983, Helen, Bob Holman, and I read our poems at a reading organized by Chris Kadison at No Se No Cafe on the Lower East Side. Over the next months Bob, Helen, and I began planning a production of San Francisco’s Burning. Helen gave us photocopies of the libretto manuscript and score. One afternoon in March of 1984, I made twenty color production drawings and planned more. Around the same time Bob directed a video of Helen, in costume as the Worm Queen, singing songs from the piece. We asked the composer Raphael Mostel to be music director, and he made an audiotape of himself singing and playing the openings of each of the opera’s songs.

Helen had a mystical side. She considered the Egyptian god Anubis to be the greatest of the deities, as protector of the dead on the journey to the afterlife. She scoffed at Jehovah and Zeus as upstarts, thousands of years younger than Anubis. In early 1985, she presented me with a gold-framed photo of a sculpture of Anubis and gave me a Tarot reading for the year that was mostly full of radiant glory. Around that time Nancy Miller Elliott took a photograph of Helen in my old apartment, a sixth-floor walkup on 79th Street by the East River. 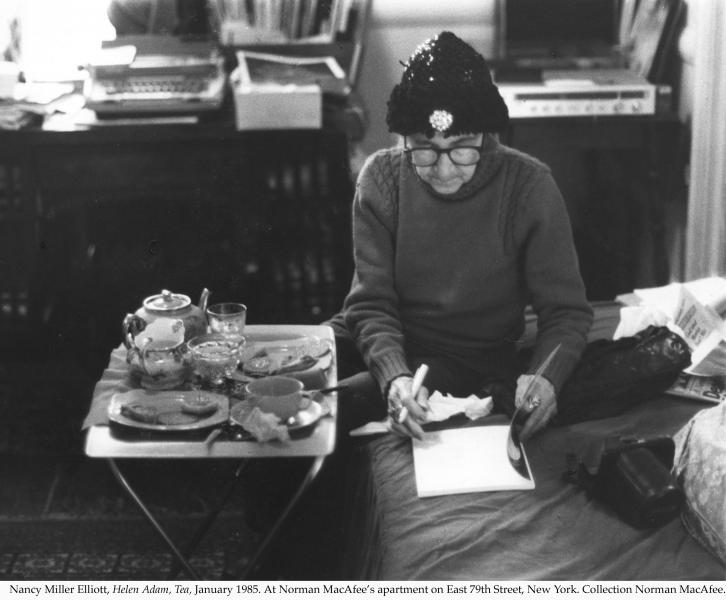 Here are sixteen of the drawings, all published in color in a magazine for the first time, and some never before published, and all digitized by my partner, Miguel Cervantes-Cervantes. They encompass the first half of the opera and could form the basis of a new production of San Francisco’s Burning.

1. On the title page, the Nameless Man, whom Helen describes as “a drab little business drudge,” starts the show by striking a gong in the form of the moon.

3. Three doomed sailors sing about throwing their cabin boy overboard during a storm to appease the Devil and save their ship: “But now we’re stuck with the cabin boy swimming in our wake.”

5. The Worm Queen, the Queen of the World of the Dead, beckons one of the sailors, a Scotsman.

7. A young gigolo, the Well-Kept Man, sings of his occupation.

8. The Worm Queen and Spangler Jack (“the dashing king of gamblers”) draw the Scottish sailor into a fatal game of cards: “Another game!” “No! No!” “Play on! Play on!”

9. The Worm Queen escorts the dead Scottish sailor to the next world.

11. The Nameless Man sings of his dreary daily routine: “One more day in the morning, / I’ll wake, and dress, and eat.”

12. The lovely Laura Valentine prepares to poison her boring elderly husband so she can marry the handsome young reformer Barty White. Mr. Valentine warns her: “Come away from that window at once, my dear.”

13. Barty and the widow Laura begin their courtship: “From his horse, Barty throws the rose to Mrs. Valentine.”

14. Neal Narcissus, a vain handsome bachelor, and Susan Pettigrew, a debutante who walks in her sleep, are to be married.

15. In the world between the living and the dead, the sleepwalking Susan encounters the dead Scottish sailor, and they fall in love: “From where do you come, with your candle lighted, sleepwalking woman, say.”

16. “In San Francisco on a Sunlit Morning”: In a park atop Russian Hill, Laura embraces Barty as Spangler Jack prepares to woo her.

A Helen Adam Reader, edited by Kristin Prevallet (National Poetry Foundation, 2007), is full of her poetry and ballads and useful information on her life and work. The book includes a CD of 13 of my drawings for San Francisco’s Burning.