Kate Colby, Davy Knittle, and Charles Bernstein convened with Al Filreis, PoemTalk’s producer and host, to talk about Hannah Weiner’s Clairvoyant Journal and to focus in particular on two pages (or prose poems, or journal entries). The two entries are those composed on April 1 (“April Fool   BRAVE GIRL”) and April 4 (“DONT COMPLAIN / April 4”). The version of the two poems available online at Eclipse (based on the 1978 edition published by Angel Hair Books) has also been reproduced here for the convenience of PoemTalk listeners and Jacket2 readers. A new edition of Clairvoyant Journal published in 2014, discussed toward the end of the podcast, is described here by Patrick Durgin. 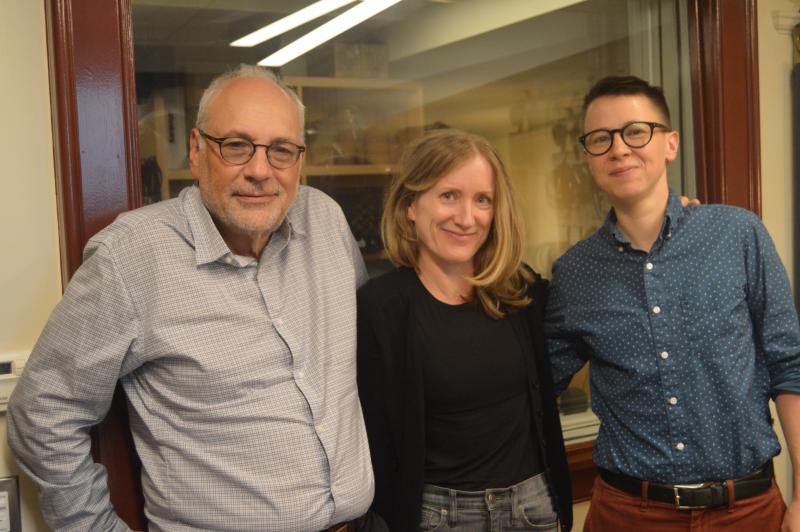 What is clairvoyant about this text — or more generally about Hannah Weiner’s seeing words? Her seeing was plain sight but also visionary perception. The group grapples with this mode — words as seen — through the striking daily and domestic (it is a journal or diary, after all) particularities of augury, foresight, and divination on view on the page by readers, and heard by listeners of the remarkable three-voice performance. Augury? Yes. What could the significance of “STOP COLUMBINE” be as two words seen and then typewritten in 1974? To what does “DANGER IN MAY” refer in an April diary note? (Pictured above, left to right: Charles Bernstein, Kate Colby, Davy Knittle. Photo by Al Filreis.) 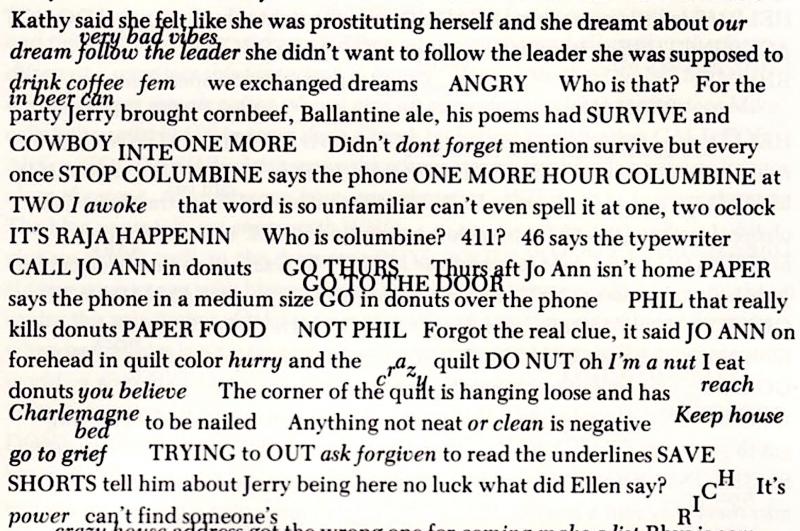 Hannah Weiner’s PennSound page, edited by Charles Bernstein, includes several recordings of performances of this work. One, dated 1981, recorded a performance of the text’s three voices by James Sherry, Bernstein, and Weiner. The performance we used for this episode of PoemTalk was recorded in 1978 and originally issued as a cassette by New Wilderness Audiographics that year. The April sections were performed by Sharon Mattlin, Regina Beck, and Hannah Weiner. The twenty-eight-minute recording of “April” poems can be heard here. In our conversation, Colby, Knittle, and Bernstein variously describe the arrangement of the trinity of voices. Temporarily, at one point, the group agrees on ego (text in roman type), superego (ALL CAPS), and id (italic). Such a rubric is only a starting point on what is crucially an unfixed psychological portrait of an artist and an arts community by way of voices — not voices, as in She hears voices, but rather as in the positively disabling view of words in others and in the near environment. Ultimately, the poem’s psychic landscape is quite local, quite detailed, and very real. (Above, left: a fragment of the 1978 edition of Clairvoyant Journal.)

This episode of PoemTalk was recorded and engineered by Yiwei Chai, Andrew Depass, and Zach Carduner, and edited by Zach Carduner. We are grateful to Nathan and Elizabeth Leight for their generous support of PoemTalk, and to our colleagues at the Poetry Foundation for their partnership on this ongoing podcast project.