The republic of space (PoemTalk #140)

Kristin Prevallet, Simone White, and Mei-mei Berssenbrugge joined Al Filreis to talk about Barbara Guest’s poem “The Blue Stairs,” title poem of the book published in 1968. It can be found on pages 61–63 of the Collected Poems, edited by Hadley Guest and published by Wesleyan in 2008, fifty years later. PennSound’s Barbara Guest page is, we think, a thing of beauty, featuring more than a dozen readings across decades, each reading-length recording organized into poem-by-poem segments. The Guest author page includes three different performances of “The Blue Stairs,” the first given at the Library of Congress in June of 1969 (just months after the poem first appeared); the second a studio recording made in 1984; the third in 1996. During this episode we used the 1969 recording as the basis of our discussion. 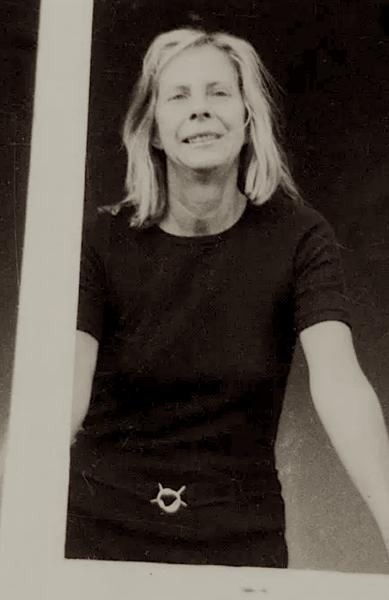 “The Blue Stairs” was inspired by a stairway in the Stedelijk Museum of Modern Art in Amsterdam, and yet, the group agrees, the poem is not really about those stairs — nor, really, any known sort of stairs other than what one could wildly imagine. Guest’s stairs will not accommodate concepts of ascent, orderly progress, step-wise elevation, nor even gradation. The stair of the poem — the poem as itself stair, the textual thing which readers attempt to scale — offers an experience that is “spatially selective,” a counter-intuitive means of “Reading stairs / as interpolation.” Such antihierarchical step-taking offers its “code” as a variable language not meant to be cracked or deciphered, or even read, so much as spatially felt. The cipher of the poem (that which it is “about” and the text itself) “consists in noticing” qualities such as color, form, radiance, balance, “fantastic area,” shape, sound. The poem as written inhibits “gradualness” and relieves us of the intense, conventional fear of taking first steps upward. This is no up. From the alleviation of fear one can enter a “republic of space.” This republic is constituted as an alternative to those spaces built by the master builders, and, having entered it, one can experience the faithful exhilaration (akin to the experience of poetry) entailed in having the ladder kicked away.

This episode of PoemTalk was recorded and directed by Zach Carduner and Adelaide Powell and was edited by Zach Carduner. We want to thank our partners at the Poetry Foundation and Nathan and Elizabeth Leight for generously supporting this and other digital outreach programs emanating from the Kelly Writers House at 3805 Locust Walk in Philadelphia.