Jenn McCreary, Frank Sherlock, and Pattie McCarthy joined Al Filreis in the Wexler Studio of the Kelly Writers House to discuss a poem by Gil Ott. The poem is called “The Forgotten” and it was published in Public Domain of 1989. PennSound’s recording of the poem comes from a performance at the Ear Inn in New York City on February 19, 1989. In No Restraints (an anthology of writings about disability culture), Gil Ott’s contribution is about invisible disability. Pattie notes that “The Forgotten” enacts this notion, especially at the beginning when it “points so much to the interior” of sourceless hurt, of forgotten wound. The “wound too great to finish telling.” The disappearing pain opens the poem and opens up the stanza. Jenn sees that the way Ott moves around in the four stanzas of the poem explains in part what he means by the phrase “the illness moves,” and in the discussion she closely tracks that sort of movement. Ott is in control of the way the poem moves, from idea to idea, trope to trope and, crucially, sound to sound (and kind of sound), but what he’s saying ultimately is that he is unable to discern the origin of that constant discomfort which makes such control possible. 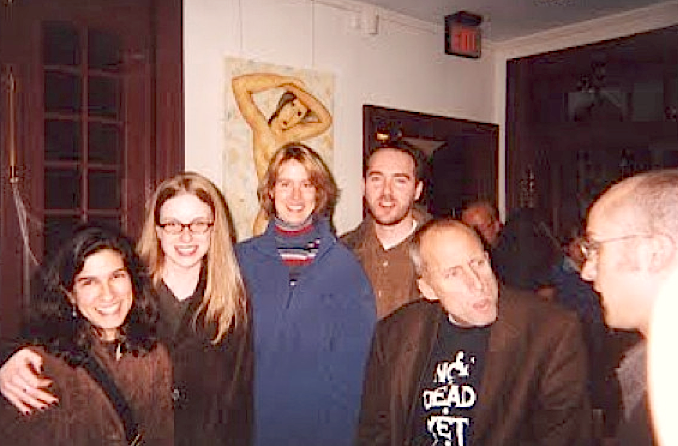 Frank takes this point and looks in turn at the poem’s unmistakable references to place and neighborhood and the forces that make one move — at, in short, displacement (as in: “being wheeled to a poor neighborhood”). This reading connects disability and personal pain with the world as it can be perceived by such a subjectivity. “Not only that the personal is political,” Frank observes, “but the physical is the political.” And: “There’s a gentrifying force that is the illness.” Pattie then supports Frank’s reading by taking us through words and forms of inwardness at the beginning of the poem and following shifts toward a vocabulary of out, opening, spreading, and externality.

The three PoemTalkers (and also their host) are all long-time Philadelphia people, and this episode ends with a series of observations about the lasting effects of Gil Ott’s community work — in the beyond-academic world of arts organizations; in the local small-press publishing world; in the network of advocacy for people with disabilities — and on the ways in which his interlocking commitments can be read in the poems. “Hard” here is not just “difficult,” as it is mostly or solely in some avant-garde poetry, but hard is hardened or beat, as in the effect of experiencing life’s day-to-day difficulties. “A chorus of hard comparisons” is a concept challenging any easy linguistic likening yet affirming the democracy of song.

PoemTalk’s episode #91 was engineered by Zach Carduner and Tyler Burke and was edited by Amaris Cuchanski. This is the last episode Amaris will edit (at least for now) and we at PoemTalk and the Writers House want to express our gratitude to her and are gladder than merely glad that as she begins her career as a teacher she will continue to be associated with us through our free and open online course called “ModPo.” Thank you, Amaris!

(Photo above at right: Gil Ott, second from right, wearing his “Not Dead Yet” t-shirt at the October 2001 Ott celebration held at the Kelly Writers House.)