Jenn McCreary, Frank Sherlock, and Pattie McCarthy joined Al Filreis in the Wexler Studio of the Kelly Writers House to discuss a poem by Gil Ott. The poem is called “The Forgotten” and it was published in Public Domain of 1989. PennSound’s recording of the poem comes from a performance at the Ear Inn in New York City on February 19, 1989. In No Restraints (an anthology of writings about disability culture), Gil Ott’s contribution is about invisible disability. Pattie notes that “The Forgotten” enacts this notion, especially at the beginning when it “points so much to the interior” of sourceless hurt, of forgotten wound.

On March 5, 2014, Frank Sherlock was interviewed by Marty Moss-Coane in WHYY's “Radio Times,” aired by NPR. Here is your link.

Poets at the house

Forty years ago today, a military coup led by General Augusto Pinochet waged war on the democratically elected government of Chile. It was the South American September 11th. That day began a period of cruel repression, characterized by extreme violence and human rights abuses. Thousands of people were tortured, murdered and disappeared. The Chilean people commemorate this day with remembrance, mourning and renewed commitment. We observe this date in solidarity from within the borders of the Empire where the coup began. Our collaborative composition examines the damage beyond the event itself, crossing continents and spanning years. You may hear resonances of folk singer Victor Jara, fundraiser/activist Ronni Moffitt, poet Pablo Neruda and CIA agent Michael Townley. Of course, there are also the voices inside the house.

The house is the site of an artist salon hosted by novelist Mariana Callejas, as recounted in Roberto Bolano's novel By Night in Chile. One of the few gathering places for artists after the coup, many artists attended — though almost no one would admit that they were there.

He worries about the war in Chechnya, and writes a sentence on that, and about acid rain, and that gets a sentence. He remembers his dreams. He overhears intellectual coffeeshop talk. It’s cold outside.

This would be the twenty-fifth book of The Alphabet; in the Alabama edition of that major assemblage, twenty-five years in the making, “You” begins on page 903, a long way in. Fifty-two sections, one for every week of 1995, each consisting of seven daily prose paragraphs, typically one, two, or three sentences each day. You write what you see, what you overhear, what news local (floods) or world (wars) occurs to you or impresses you, what you remember, what you know or think you know during these days. In one “You” is the diary in New Sentences of a year.

If nothing ever ended (PoemTalk #38) 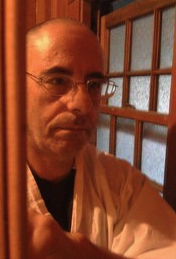 Linh Dinh, Julia Bloch, and Frank Sherlock joined Al to talk about a poem published in Norman Fischer’s book Turn Left in Order to Turn Right (O Books, 1989). The poem is “I’d Like to See It” (text; audio). When Fischer was interviewed by Charles Bernstein for a Close Listening program in 2006, he read six poems from that 1989 book, including our poem. These six readings, and a great many more, are available on Fischer’s PennSound author page. His own website also includes other recordings of poetry, and also talks.

Fischer is the former abbot of the San Francisco Zen Center, and is the founder of and a teacher for the Everyday Zen Foundation, a network of communities and projects. He began publishing poetry in the late 1970s and in those early years especially his writing was associated with that of the Bay Area Language Poets.

Fischer wrote the following prefatory statement to Turn Left in Order to Go Right: “Occasionally when people ask me about Zen practice I say it’s not the usual kind of activity in that you can’t really try to do it. If you try to move toward it it always seems to be somewhere else. The harder you try the worse it gets. But you can’t not make any effort either; in fact you have to make a mighty effort, but in another direction. It’s a little like turning left in order to go right.”

This sense of quasi-nonintentional misdirection, our Talkers felt, is a key to understanding the way Fischer in “I’d Like to See It” deploys the refrain “I’d like to see it that way.” Does it demand or expect the seer to see a certain way? Does it express desire? And how variously? Does it imply a program for a better future? Ah, but — as Linh Dinh points out — it seeks an end to war but wonders if wanting war to end would ever end it: “[W]ould my wanting / To end it ever end if nothing ever ended / I’d like to see it that way.” Julia Bloch observes that the refrain both “swerves away from the intention” going on in any line preceding it “and also modifies it.” At one point, grappling with the poem’s refrain, Al puts it this way: “What I have now is not the way I’d like to see it. Or it could mean: the way I’m seeing it is the way I’d like the world to be, which happens to be the way it is because I observed it. One way or other, there is a difference between the way the world is and the way the world is if he is able to see it the way he’d like ”

Frank Sherlock reminds us that Zen practice and jazz, cognate fields and modes of (non)thought especially in the US, produce a series of variations that focus our attention on modes of thought rather than on the subject matter of the poem (war, air pressure, one’s “daily objects,” a chimney). Frank reminds us of Fischer’s “To be without content, but full of ” where light equals (in this case) compositional process, the proceedings of a thought variously through unanticipated contexts. 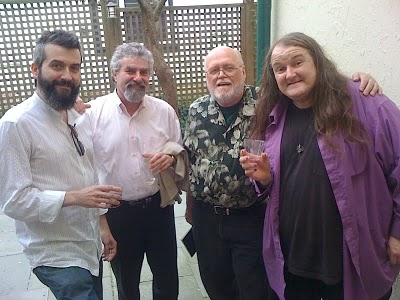