Recently I released an episode of PoemTalk in which Clark Coolidge — who has long advocated that Jack Kerouac be taken seriously as an experimental poet, indeed a sound poet — and others joined me to discuss a few sections of Kerouac’s Old Angel Midnight. I usually try to understand general responses to new PoemTalk episodes. For this one I was especially keen. How is Kerouac viewed within the poetry community? Doubtfully, I would think.

Bob Cobbing (1920–2002) — sound poet, visual and concrete poet, DIY printer, and active member of an alternative socio-poetic community in the UK — insisted that there’s no use in adding to poetry what’s already there. In “Some Statements on Sound Poetry” (1969) he wrote: “Gone is the word as the word, though the word may still be used as sound or shape.” And he added: “Poetry now resides in other elements.” In this episode, Al Filreis is joined by sound poet Jaap Blonk, phonotextualist Steve McLaughlin, and experimental archivist Danny Snelson as they approach a single work by Cobbing, “Portrait of Robin Crozier,” in an effort to identify generally those “other elements.”

Robert Sheppard on Bob Cobbing in honor of his 75th birthday

I visited Bob Cobbing, and thus met my first poet, on November 3 1973. I was still at school, keen to put on an exhibition of concrete poetry. I recognised this as the wilder edge of the new British poetry I had discovered through Horovitz' anthology Children of Albion and Bill Butler's Brighton bookshop. In the school library there was, unaccountably, Emmett Williams' An Anthology of Concrete Poetry. Bob was in it.

When I arrived at Randolph Avenue to collect some hansjörg mayer posters, Bob was already talking to a student who was writing a thesis on language in visual art. I listened as they talked and sounded some of the Shakespeare Kaku. I remained mute, uncertain. Bob played a tape of himself and Peter Finch performing e colony from the Five Vowels, a then incomplete project. He showed us the work in progress. I stayed for six hours literally learning the life of a poet.

A note about teaching Bob Cobbing 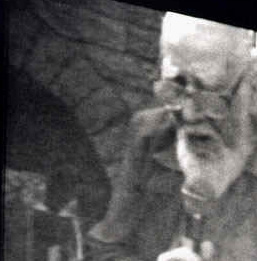 If it's true, as Bob Cobbing put it in 1969, that "Sound poetry dances, tastes, has shape," then those of us who have been teaching poetry-as-printed (poetry on the page, unsounded poetry, what have you...) would presumably have to add at least these three dimensions to the realms of approach in the classroom. Which is perhaps too elaborate a way of saying that to have been prepared to teach words on a page, no matter how complex, is not to be prepared to help present a language as a kind of dance, as something to be tasted, as something that has a physical shape.

Cobbing again: "Leonardo da Vinci asked the poet to give him something he might see and touch and not just something he could hear. Sound poetry seems a to me to be achieving this aim."* Same problem here, I'd suggest. See and even hear we can do, with work. But touch? That's difficult. (And although seeing a printed poem - really seeing it as a thing, in William Carlos Williams's sense ("Poems aren't beautiful statements. They're things!") - is something we think we do in a close reading when often it is not what we're really doing.)

'gone is the word as word'

Bob Cobbing (1920–2002) was so cool that he embodied a post-word-as-such aesthetic, which enabled him to reach through language to sound and material (concreteness) and also an alphabeticality (the letter as letter). Ruth & Marvin Sackner's amazing archive in Miami includes a good deal of Cobbing's work, and our Matt Abess spent the summer of '06 and a good bit of time since then digitizing some of it and preparing for an exhibit that is opening now at the University of Pennsylvania library's gallery. This activity culminates in an event at the Kelly Writers House on October 11. For more: 1 2 3 4.