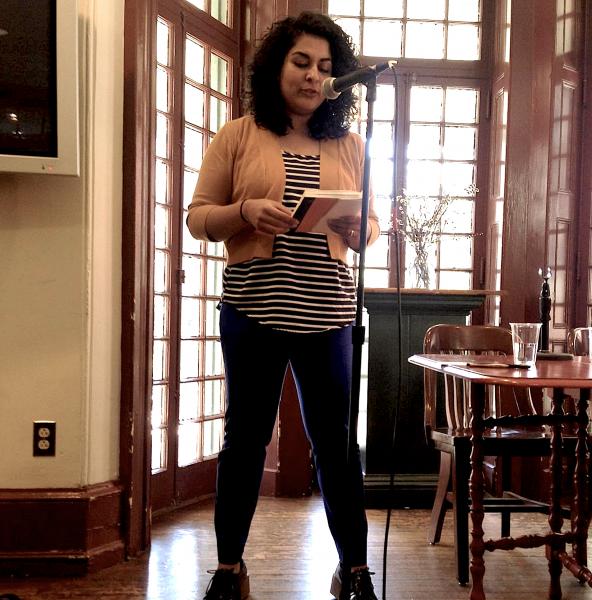 long alphabetical poem called “Foreign Terms.” The “W” poem in this sequence is “W Is for Walt Whitman’s Soul,” and that is the work we ponder in this episode of PoemTalk. At the autumn 2017 Book*hug launch, Divya chose the perform this poem; a video is available.

The poem powerfully conveys the sense of inexorable forward motion in the relationships the poet progressively builds between and among words — and conceptually between and among things: those myriad elements of the specific and special thinginess colonial extraction has enabled. Increasingly dominant sounds, as words of the poem go by, compress those sounds; the already looted space between words (as read aloud, as thought about) closes up, so that one senses in the ears — and verily in the mouth — a dense intention of the dumping of a sonic motherlode. (Photo above right: Divya Victor at the Kelly Writers House; photo by Jena Osman.) 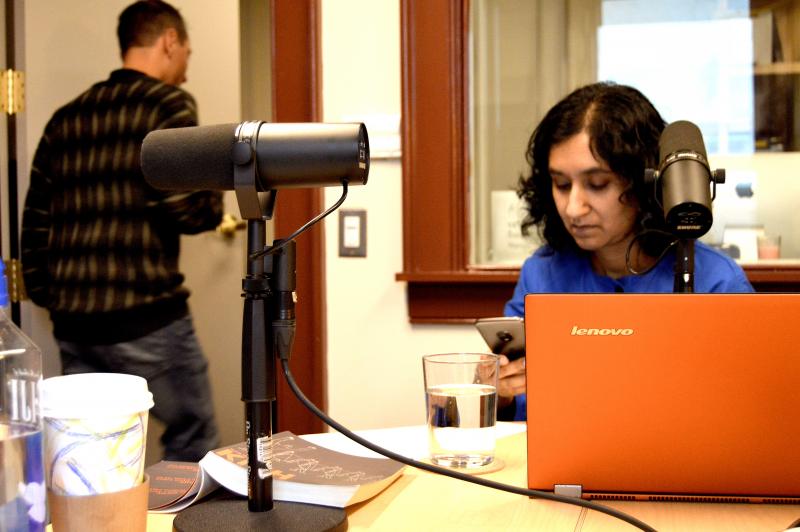 What of Whitman? The work here might well be, the group considers, something akin to this: a notion of the poet as Suez Canal. In a sense, Mytili notes, the whole project of English derives from the colonial era, Whitman being on the hyperenthusiastic, plundering end of the word-extracting spectrum. Yet it is, of course, a spectrum. (Photo above left: Mytili Jaganathan in the Wexler Studio of the Kelly Writers House before the recording of this episode.)

Because as formal mode it can engage the verbal density of a theft in the very act of critiquing it, poetry can do what conventional academic critical or theoretical prose cannot or typically does not. How the critique is made is equally as important as the what of the critique’s content. Readers of this poem grapple with an overwhelming Whitmanian sonic energy, and must make the effort to discern the tone of such usage. Can words-sounding-stolen-things restore any sort of appearance of the cultural thing that has been disappeared? Can such plummy, sonorously rich, full, savory (etc.) words stand as apparitions, reminding us of profound loss even as they fill us? What postcolonial variation of the thing-word relationship is offered here? These are questions raised by the poem’s very sound.

The ModPo syllabus — actually, the supplement to the main syllabus of that free, open, non-credit online course, called “ModPoPLUS” — includes access to other resources pertaining to this poem:

For items 3 and 4 above, one needs to register or enroll in ModPo (again, it’s free) to view these videos. The link for enrolling is here. General information about ModPo can be found at modpo.org.

This episode of PoemTalk was engineered and directed by Chelsey Zhu and Zach Carduner, and edited, as always, by Zach Carduner. PoemTalk has been produced and hosted by Al Filreis since its first episode in 2007. We wish to thank Nathan and Elizabeth Leight for their generous ongoing support of PoemTalk.