Boring in a different way (PoemTalk 127)

Al Filreis and Zach Carduner, respectively PoemTalk’s producer-host and editor, traveled to Los Angeles to the home of Marjorie Perloff, where they made a sound recording and film of a convesation about a poem by John Ashbery with Susan McCabe, Robert von Hallberg, and Marjorie herself. The poem is “The Short Answer” from a late book, Quick Question (2013). There are, abounding, the usual marooned pronouns, and the typically high “daftness quotient.”* Marjorie and Al chose this poem, in fact, with the goal of exploring of what it means to read closely and talk in detail about a seemingly “minor” poem from a “major” poet, from a late book not especially praised — a poem that might strike readers as an effect of Ashbery’s incessant and seemingly easeful poetic fermentation. Perhaps, too, the poem evinced a style grown old.

One reviewer noted of Quick Question: “What Ashbery does not offer here is the explosive and celebratory idea that the future, many futures, remai 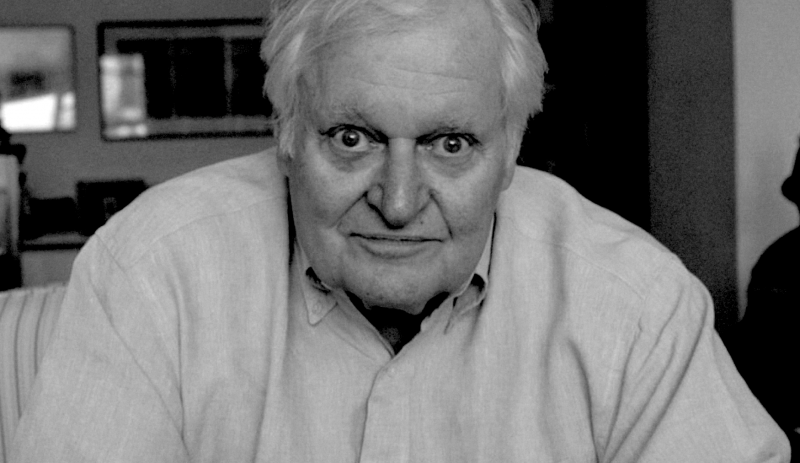 n to be written.”** And probably some or all of the PoemTalkers began our session thinking the same. But what emerges in this lively discussion is something of the opposite view: the poem is indeed about how what is written is the same as what remains to be written. Or: there is no future but the present poem. This is why “we hold on to these old ways,” not an expression of the fear of a late style aging produces, but a modest pleasure taken in a mode gotten right here and there. “The Short Answer” is the typical long answer, succinctness and pointblankness being tantamount to untruth. Whether it’s a “minor” poem is of course irrelevant. But its theme and register are in the major Ashberyian key.

*Michael Robbins in the Chicago Tribune, quoted by the Poetry Foundation’s “Harriet” blog.

I am forced to sleepwalk much of the time.
We hold on to these old ways, are troubled
sometimes and then the geyser goes away,
time gutted. In and of itself there is
no great roar, force pitted against force that
makes up in time what it loses in speed.
The waterfalls, the canyon, a royal I-told-you-so
comes back to greet us at the beginning.
How was your trip? Oh I didn’t last
you see, folded over like the margin
of a dream of the thing-in-itself. Well, and
what have we come to? A paper-thin past,
just so, and more’s the pity. We regurgitate
old anthems and what has come to pass, and why
dwell on these. Why make things more difficult
than they already are? Because if it’s boring
in a different way, that’ll be interesting too.
That’s what I say.

That rascal jumped over the fence.
I’m wiping my pince-nez now. Did you ever hear from
the one who said he’d be back once it was over,
who eluded me even in my sleep? That was a particularly
promising time, we thought. Now the sun’s out
and it’s raining again. Just like a day from
the compendium. I’ll vouch for you,
and we can go on scrolling as though nothing had risen,
the horizon forest looks back at us. The preacher
shook his head, the evangelist balanced two spools
at the end of his little makeshift rope. We’d gone too far.
We’d have to come back in a day or so.