Susan Schultz, Sally Van Doren, and Huda Fakhreddine joined Al Filreis to talk about Sylvia Plath’s poem “The Stones.” It was written in October or early November of 1959 and appears as the seventh poem in a seven-part sequence called “Poem for a Birthday.” The recording the group hears at the start of the conversation comes from a studio performance Plath did for BBC Records between 1960 and 1962 (and this particular performance probably dates from 1962). The most readily accessible copy of the audio has been posted at YouTube. 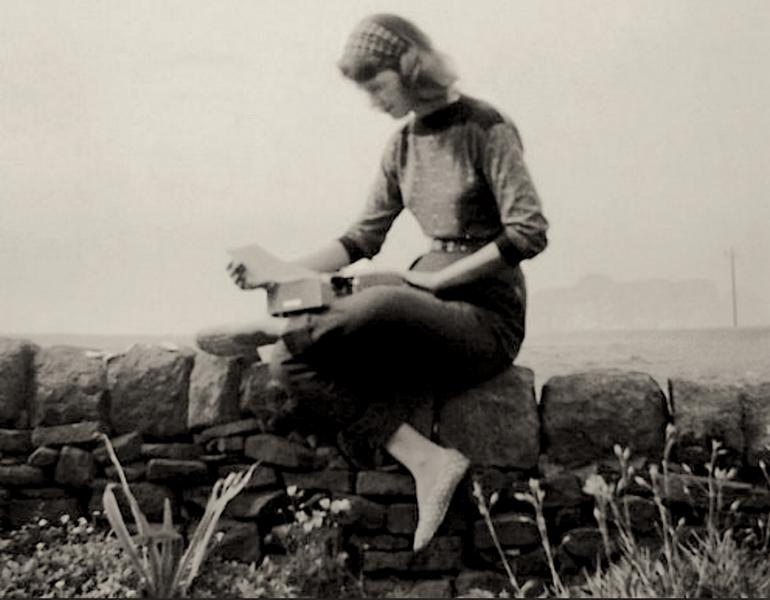 The group, starting with Susan, begins with Plath’s constant substitution of the natural and the artficial. They then compile instances of her strategic mixing of metaphors. Sally also points out the “shifted scenes.” Huda notes the ironic reversals of images of illness and health and the resulting confusion and means and ends. It simply cannot be discerned which person (the speaker-patient? a foetus within? another?) is being constructed by this place, nor what is the relationship between mending and newness. Moreover, if “This is the city where men are mended,” where does that leave the speaker? Is the next step more hell than rehab? What exactly is this “after-hell”? Is it associated more with birth than with death, more with beginnings (delivery) than with endings (deliverance)? Susan breaks in to confess: “I’d like to call into question the word ‘confessional.’ I think late Plath, while there is that energy and that anger, is still run through this mythological template, which I recall made me furious at her at a certain point in my life. I’d like to say that even when we call her ‘confessional,’ she’s always creating a mythology.” Al then observes that the mythology in this poem is at least partly borrowed from modernism — the modern city, the dystopian commerce of spare parts, a space itself derived from “Waste Land” fragmentation. “There are high poetic declarations,” Al adds.

This episode of PoemTalk was directed and engineered by Zach Carduner, and edited by the same talented Zach Carduner. PoemTalk’s makers are grateful as always to Nathan and Elizabeth Leight for their support of this series, and to the staff of the Kelly Writers House for all their hard work in taking good care of PoemTalk’s special guests, especially in this instance Susan Schultz, who was visiting us all the way from Hawaii.

This is the city where men are mended.
I lie on a great anvil.
The flat blue sky-circle

Flew off like the hat of a doll
When I fell out of the light. I entered
The stomach of indifference, the wordless cupboard.

The mother of pestles diminished me.
I became a still pebble.
The stones of the belly were peaceable,

The head-stone quiet, jostled by nothing.
Only the mouth-hole piped out,
Importunate cricket

In a quarry of silences.
The people of the city heard it.
They hunted the stones, taciturn and separate,

The mouth-hole crying their locations.
Drunk as a foetus
I suck at the paps of darkness.

The food tubes embrace me. Sponges kiss my lichens away.
The jewelmaster drives his chisel to pry
Open one stone eye.

This is the after-hell: I see the light.
A wind unstoppers the chamber
Of the ear, old worrier.

Water mollifies the flint lip,
And daylight lays its sameness on the wall.
The grafters are cheerful,

Heating the pincers, hoisting the delicate hammers.
A current agitates the wires
Volt upon volt. Catgut stitches my fissures.

A workman walks by carrying a pink torso.
The storerooms are full of hearts.
This is the city of spare parts.

My swaddled legs and arms smell sweet as rubber.
Here they can doctor heads, or any limb.
On Fridays the little children come

To trade their hooks for hands.
Dead men leave eyes for others.
Love is the uniform of my bald nurse.

Love is the bone and sinew of my curse.
The vase, reconstructed, houses
The elusive rose.

Ten fingers shape a bowl for shadows.
My mendings itch. There is nothing to do.
I shall be good as new.