Toward a poetry and poetics of the Americas (37)

The night of the non-event. War in the vacant sky. The Phantom’s absence.

The yellow sun’s procession from the mosque to the vacant Place. Mute taxis.

The night of the Great Inca did not happen. Engineless planes. Extinguished sun.

Fisherman with no fleet fish with no sea fleet with no fish sea without fishermen.

The wind neither rose nor subsided. The Jews are absent. Flat tires.

The little lights are not lit. No child has died. No rain.

I did not say that spring was breathing. The dead did not return.

The mosque has launched its unheated prayer. Lost in the waves.

Snuffed is the street. To shut off the gas. Refugees with no refuge no candle.

In the exhalations of Americans there is a crumbling empire

In the foul waters of the rivers there are Palestinians

In the wheat stalks there are insects vaccinated against bread

In the Arabian boats there are sharks shaken with laughter

In the camel’s belly there are blind highways

OUT OUT of TIME there is spring’s shattered hope

When the living rot on the bodies of the dead

When the combatants’ teeth become knives

When words lose their meaning and become arsenic

When the aggressors’ nails become claws

When old friends hurry to join the carnage

When clergymen pick up the hammer and crucify

When officials open the door to the enemy

When roses grow only in cemeteries

the human tide moves on …

Translated from her original French by the author

by Jerome Rothenberg and Javier Taboada

Places are part of nature, of the bigger picture. We are interrelated. When we contemplate them in their own right, they can sometimes change our lives; they can become spiritual experiences. (E.A.)

(1) Born in Beirut, educated in French, which was designed to supplant her native Arabic, a student at the Sorbonne and at UC Berkeley, Adnan was a poet, novelist, playwright, librettist, painter, and multimedia artist. As Hilary Plum tells us: “The poem [‘Arab Apocalypse’] is written in 59 sections (others term it a collection of 59 poems) and in distinctively long lines … Small ink sketches, sometimes no more than a swift arrow or darkened circle, appear between, beside, or as eruptions within the lines of poetry. This approach is distinct in Adnan’s oeuvre … This union of poetry and visual art also distinguishes Apocalypse within the landscape of contemporary American poetry; current parlance would call such a work ‘hybrid’ …”

But not only hybrid in Plum’s sense, it is also culturally hybrid, with references to many cultures and geographies as if there were no lines between them, or, put otherwise, it is a world poem: it is large, it contains multitudes, as with Whitman’s new American poet.

(2) Writes Adnan about her own self-journey, implicit here: “Speaking English was an adventure, but it also resolved my ambiguous relationship to the French language: something deep inside me has always been resentful of the fact that French came to us in Lebanon through a colonial occupation, that it was imposed, that it was not innocently taught to me as a second language, but a language meant to replace Arabic. For me, English had no such connotations. […] I must say that when I landed in the United States, I had a kind of fluid identity: was I Greek, Ottoman Arab, almost French? […] It was in Berkeley that all the threads that made up my mind and soul came together: I became what I was, I became an Arab, at the same time that I was becoming an American.” — E.A., quoted in “The Itinerary of an Arab-American Writer.” (in Scheherazade’s Legacy: Arab and Arab American Women on Writing, Praeger, 2004) 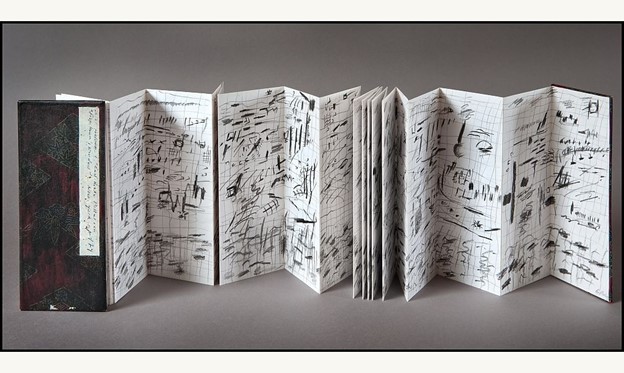 [N.B. The poem and commentary, above, are from the forthcoming assemblage of North and South American poetry (“from origins to present”) coedited by Jerome Rothenberg and Javier Taboada, and scheduled for publication in 2022 by the University of California Press.]